The Best and the Most Beautiful


Due to the variety of beaches on the different coastlines around Lisbon, it’s not easy deciding where to go for a day of sun, sea and sand. It always depends on whether you’re relying on public transportation or renting a car, and if you’re looking to just sunbathe, swim or surf. Below is a list of the best beaches in the region, taking into account their accessibility, crowd-pleasing characteristics or Instagram-worthy beauty. 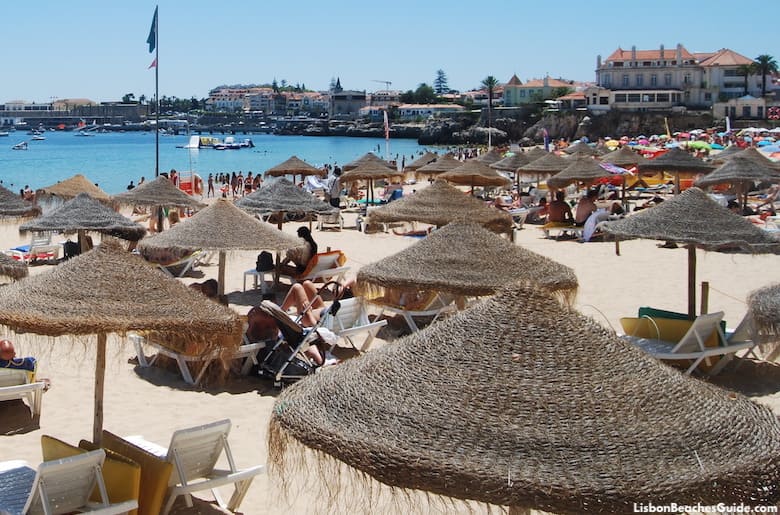 It’s the beach closest to the train station in Cascais, but it’s the calm waters and beautiful scenery that really brings the crowds of tourists and the local youth. It’s also conveniently found just outside the pedestrianized old center of town, and is the starting point of a continuous promenade that goes past a number of other beaches. If you’re looking for quiet moments by the sea and plenty of space to spread your towel, this is not the beach for you, but you’ll still want to make it your first stop on a beach-hopping day along the coast closest to the center of Lisbon.

Beach for: Swimming, Paddling, Romantic walks by the sea
How to get there from Lisbon: Train 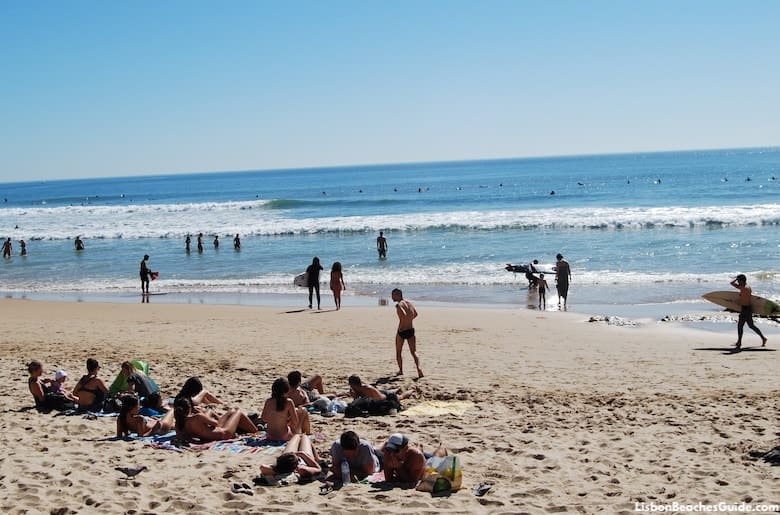 The biggest beach closest to Lisbon is currently the most popular with young tourists, thanks to its sports facilities that allow you to surf or play volleyball or beach soccer on the sand. It’s also one of the most popular with locals, so expect crowds on weekends. During the official bathing season you’ll also find massage stands and plenty of spots for drinks and meals.

Beach for: Surfers, Sports
How to get there from Lisbon: Train 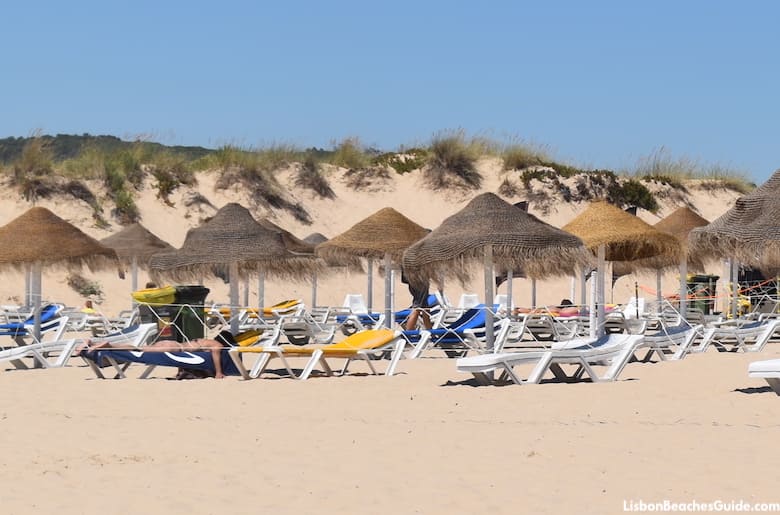 The longest stretch of sand of all the coastlines in the Lisbon region is divided into different beaches, some of them with trendy bars and others providing enough privacy for naturists. A tourist train connects the beaches in the summer season, going past the different bars and ending at the nudist section and Lisbon’s “gay beach.” The bars are also the places to be at night, serving cocktails to the sounds of live DJs.
Surprisingly, it attracts few tourists, but it’s the top choice of the people of Lisbon for a day by the sea.

Beach for: Surfers, Kitesurfers, Nightlife, Nudists
How to get there from Lisbon: Bus 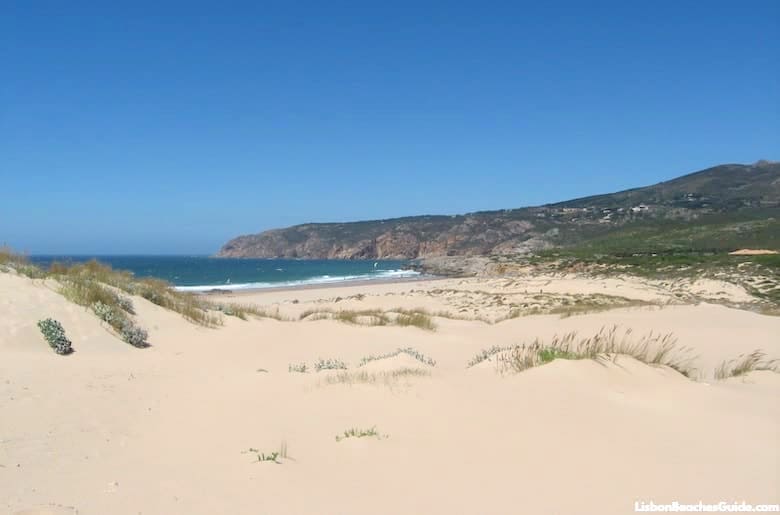 It’s windy and therefore the beach for windsurfers, but also for those who want a less crowded beach surrounded by natural beauty. It’s part of the Sintra-Cascais Natural Park, and is also known for its seafood restaurants and dunes of golden sand. If you’re a James Bond fan, you may have already seen it in the opening scene of “On Her Majesty’s Secret Service.”

Beach for: Windsurfers, Foodies
How to get there from Lisbon: Train+Bus

See the Praia do Guincho Guide. 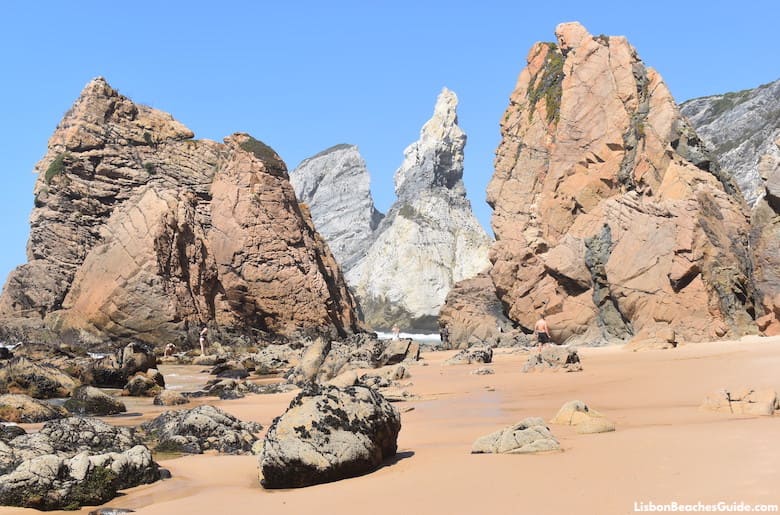 Europe’s westernmost beach is located halfway between Sintra and Cascais, below a cape that marks the westernmost spot of mainland Europe. You don’t need to be a hiker or a mountain climber to reach it, but it requires some patience and effort, as you have to follow a trail down a cliff. The sense of adventure and the magnificent all-natural scenery of sea stacks make it one of the most memorable and rewarding experiences on the Lisbon coast. It’s a stunningly beautiful and romantic place, and if its waves weren’t usually so ferocious (and therefore forbidding swimming), it would probably be Lisbon’s number one beach.

Beach for: Couples, Nudists
How to get there from Lisbon: Train+Bus 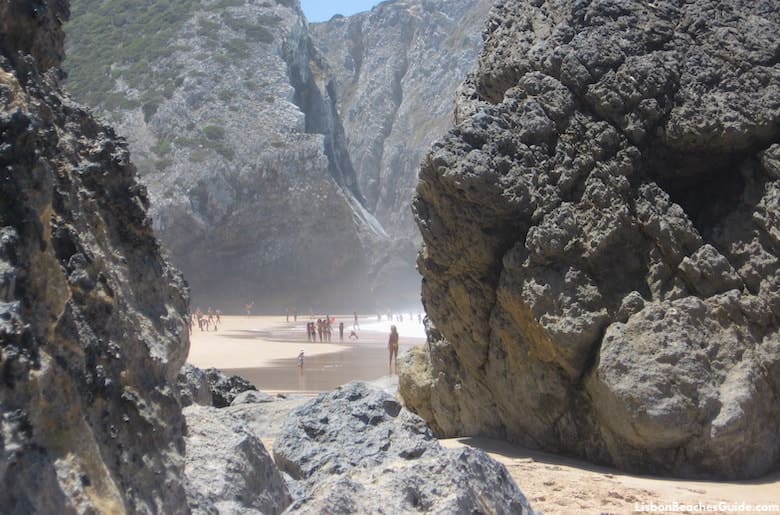 Largely considered one of Lisbon’s (and even one of Europe’s) most beautiful beaches, this is a wild beach dotted with dark rocks. Because there’s no direct public transportation, it’s mostly free of tourists, but its natural beauty has begun to attract an increasing number of locals. On the quieter days there’s enough seclusion for naturists, but can be quite crowded on weekends.

Beach for: Couples, Instagram shots
How to get there from Lisbon: Car 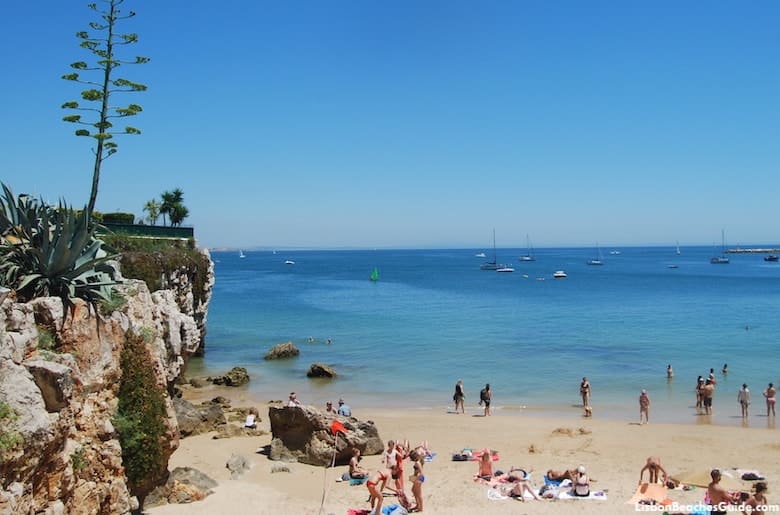 If you’re looking for the perfectly-scenic Instagram beach, this is it. It’s quite small, but it’s Cascais at its prettiest, nestled between rocks facing the harbor and with crystal-clear waters.
After a day in the sun, head up the steps to the terrace that overlooks the beach, and take a selfie with the beautiful scenery as backdrop.
It’s conveniently located in the pedestrianized center of Cascais, just a short walk from the train station.

Beach for: Swimming, Couples, Children, Instagram shots
How to get there from Lisbon: Train 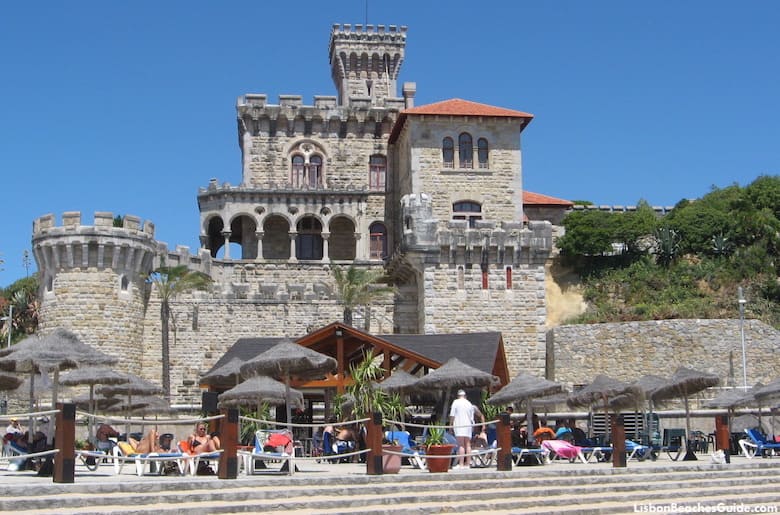 Overlooked by a castle and found just across the road from Europe’s largest casino, this was Lisbon’s postcard beach in the mid-20th century. It remains one of the most popular, thanks to the many hotels nearby, the good facilities and the location by a train station (that takes you to downtown Lisbon in just over 30 minutes).

Beach for: Drinks in the sun; Instagram shots
How to get there from Lisbon: Train

See the Praia do Tamariz Guide. 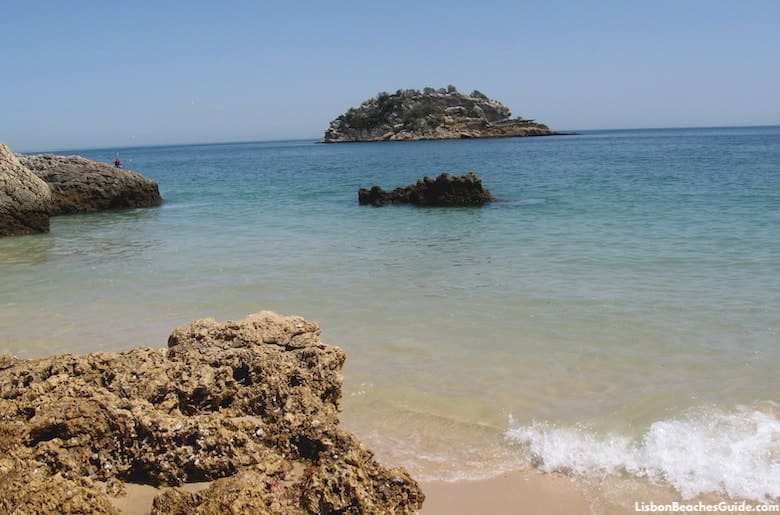 It’s the most beautiful coastline in the Lisbon region, and if it were closer to the city, it would be where everyone would go for a day at the beach. The beaches of the Arrábida Nature Park have calm, crystal-clear waters and a landscape that makes them look like an island in the Indian Ocean, despite the Mediterranean vegetation and the Atlantic waters. You need a car to get there, but it’s a wonderful day trip on a summer day.

Beach for: Couples, Instagram shots
How to get there from Lisbon: Car 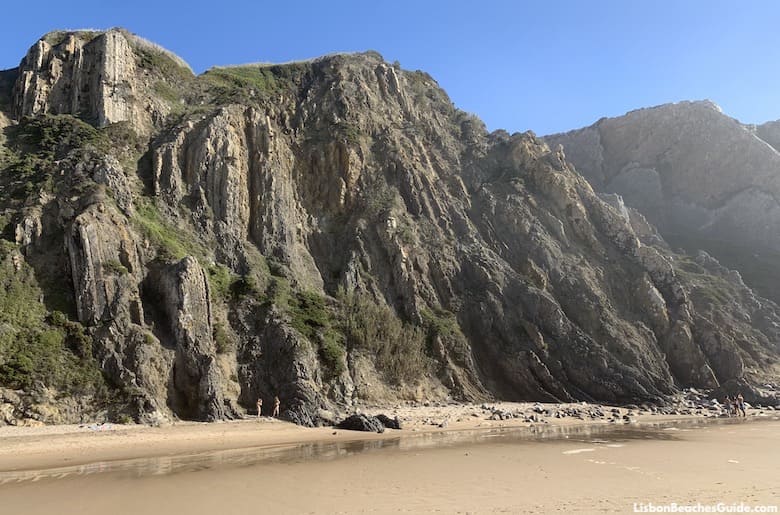 It’s the largest beach on the Sintra coast, and features well-preserved dinosaur footprints on its tall cliffs, plus what is said to be Europe’s largest seawater swimming pool. It attracts a mostly local, young and sporty crowd, which surfs or drinks at the bars facing the sea, even outside the official bathing season.

Beach for: Surfers
How to get there from Lisbon: Train+Bus

Beaches on the Southern Coast