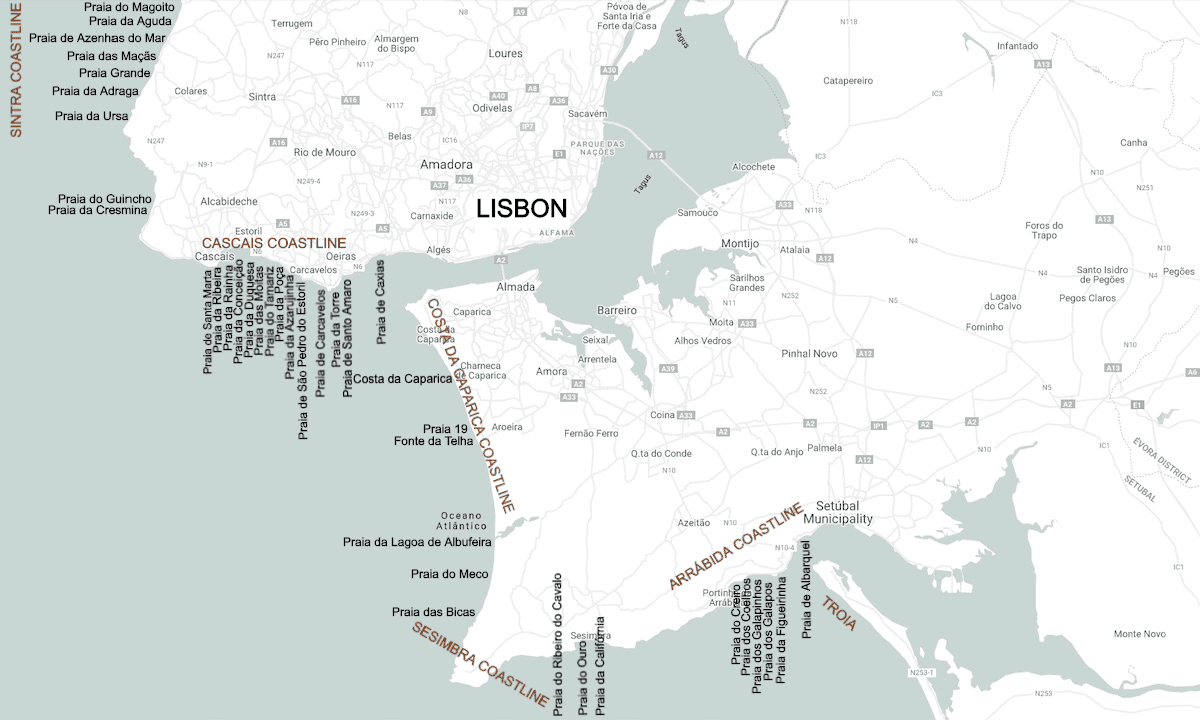 As you can see on the map above, the beaches closest to the center of Lisbon are those on the Cascais coastline, which are connected to the city by a regular train service. For that reason, those are the most popular with tourists, particularly Carcavelos and Praia da Conceição. You can walk from Praia da Conceição all the way to Praia da Azarujinha, by following a promenade. The beaches of Rainha, Ribeira and Santa Marta are also within walking distance of the train station and anywhere else in the center of Cascais. For the beautiful surfing beach of Guincho and neighboring Cresmina, you need to take a bus in Cascais.

To the north are the wilder beaches of Sintra, known for their natural beauty. Although Sintra is one of Portugal's most visited towns, its beaches attract few tourists, as they require taking rather infrequent buses. They are therefore mostly frequented by locals, although Praia das Maçãs can be reached by a popular historic tourist train. Praia da Ursa is right by the cape marking Europe's westernmost point, and has become quite a popular destination. Although it's part of Sintra, it's faster to reach by bus from Cascais.

The people of Lisbon prefer the beaches to the south, mainly the coast by the town of Costa da Caparica. It takes just anywhere between 20 and 30 minutes to reach by car, but the bus (which departs from outside the tourist center) takes about 45 minutes to over 1 hour, so very few tourists choose it for their day in the sun. Gay men do head in this direction for Praia 19, which is popularly known as the “gay beach.” It’s by Fonte da Telha, which is an official nude beach.

To the south of Costa da Caparica are the beaches of the fishing town of Sesimbra, which have also grown in popularity, especially the wild Praia do Ribeiro do Cavalo, which social media has shown to be one of Portugal’s most beautiful beaches. Praia do Meco is a trendy beach for local bohemians, and is another official nude beach.

To the east is the Arrábida Natural Park, which is home to more beaches topping the list of Portugal’s most beautiful. Praia do Creiro is the more accessible one, but Praia dos Galapos and Praia dos Galapinhos are the postcard beaches. In the distance you can see the peninsula of Troia, which is officially outside the Lisbon Coast (it’s the northern tip of the Alentejo coast), but very much worth considering for a day trip from the capital.

You can find out exactly how to reach each beach in our guides, which all include detailed transportation information (see the links at the bottom of this page).

Zoom in and out on the map below to locate available hotels on the Lisbon coast and check prices and availability: