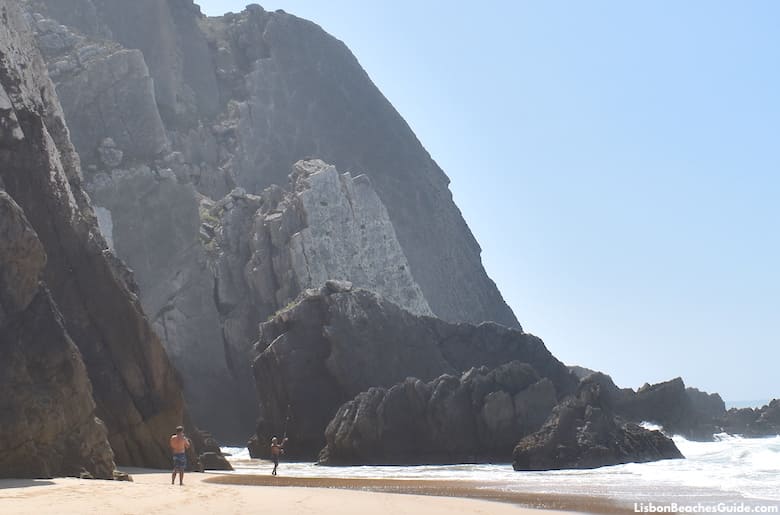 Praia Grande is the largest beach in Sintra

The name tells you about the size of this beach, which, with its over 2km of golden sand, is the largest in the Sintra region. It’s considered one of Portugal’s cleanest, and a favorite for surfing and bodyboarding (it has been the site of European surfing competitions and world bodyboarding championships). 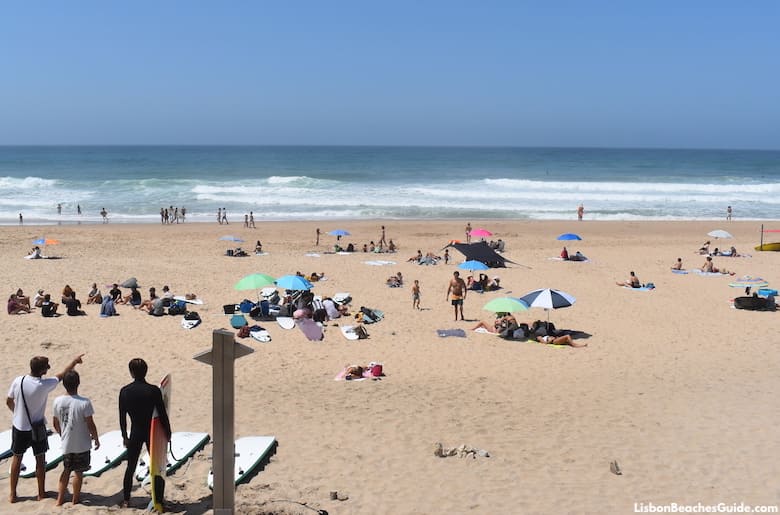 Surfing is the main activity in Praia Grande

It attracts a young, sporty crowd and a large part of the population of Sintra in the summer, but is big enough to hold everyone. 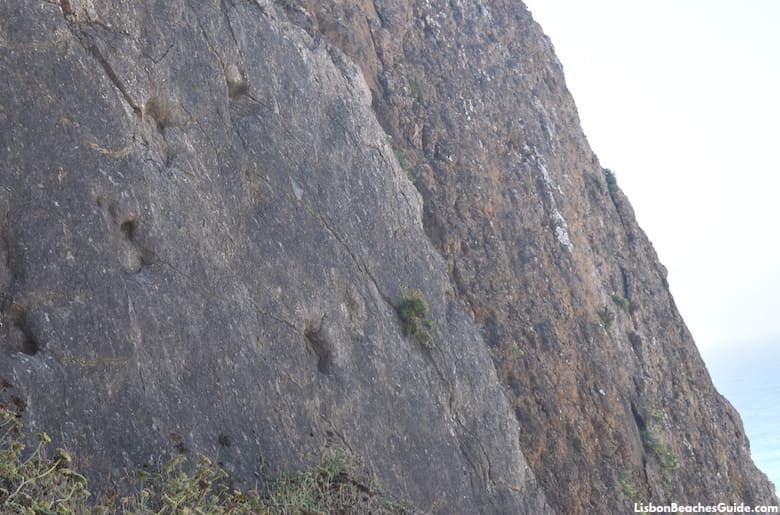 Dinosaur footprints on a cliff in Praia Grande

It was also a popular spot in prehistory -- a total of 51 dinosaur footprints, from 170 million years ago, have been found fossilized on the cliffs to the south, about 50 meters (165 feet) from the sandy area. Discovered in 1981, they were made by carnivore and herbivore dinosaurs, and can be seen at low tide. The most visible ones are on a limestone slab on a slope reached via a staircase (this was mud, flat and under water when the footprints were created). There’s a magnificent view of the beach and the coast from the top of the stairs, but, due to the risk of rockfall, access to this staircase is limited to ten people at a time, for a very brief period, and only for “educational, technical and scientific” observations of the footprints, as indicated by a sign at the top. 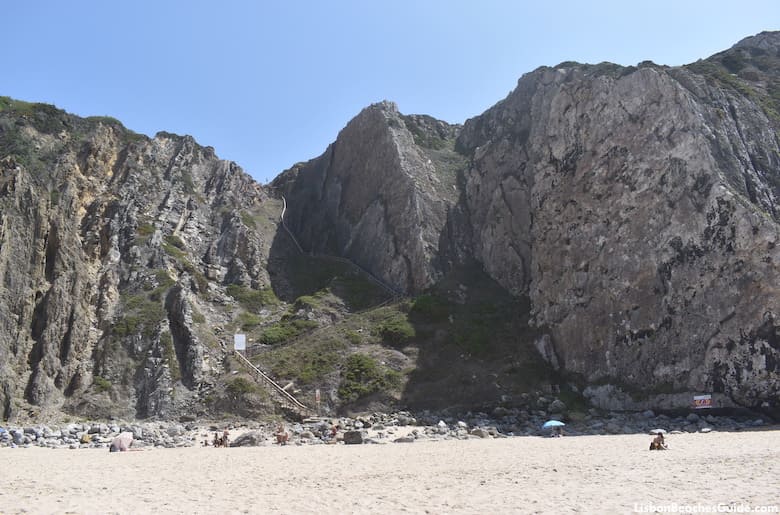 A staircase provides access to the dinosaur footprints on the cliffs

Praia Grande is less windy than other beaches on this windy coast, and at low tide it joins a smaller beach (Praia Pequena). 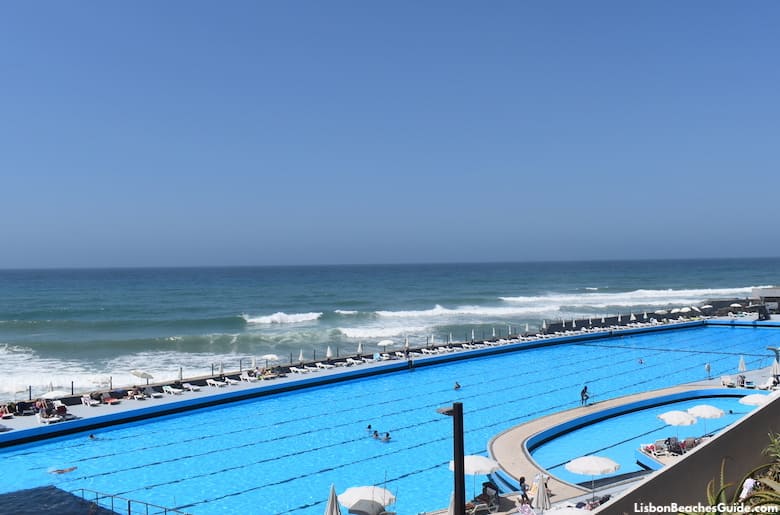 The seawater swimming pool above the beach

On the northern side is what is said to be the largest seawater swimming pool in Europe (about 100 meters/330 ft long). It overlooks the Atlantic, and opens from May to September. It’s part of the Arribas Sintra Hotel (see below), and is also open to those not staying at the hotel (upon paying an admission fee). When the ocean waves are too intense, this is perfect for families. Part of it is reserved for children, with a depth of just 0.65 meters (about 2ft), while the main part, for adults, has a depth of between 0.80 meters and 3.95 meters (just over 2.5ft and 13ft). The average water temperature is between 19 and 24 degrees celsius (66 to 75 Fahrenheit). It also has two diving boards, both 3.10 meters (10ft) high.
At the beach there are several cafés and restaurants for drinks or meals with a sea view.

How to Get to Praia Grande


From Lisbon: There is no direct transportation from Lisbon to Praia Grande. You’ll have to take the Sintra train from Rossio Station, and get off on the second-to-last stop, Portela de Sintra (takes 37 minutes).
At the Portela de Sintra bus terminal (which is right outside the train station), take Scotturb bus 439, which departs around every 1h45m and reaches Praia Grande in around 35 minutes. Bus 441, whose final stop is the village of Terrugem, also stops by Praia Grande (the journey time is 16 minutes). Note that there are fewer services between September and May, and even fewer on weekends, so check the schedules at the bus stop before departure.
From Sintra: You can either walk for 15 minutes from the center of Sintra to Portela de Sintra, or take the train from Sintra station to Portela de Sintra (there are two or three trains per hour, and it takes just one minute!), then hop on bus 439 or 441.
Staying in Sintra is therefore more convenient if you want to go to Praia Grande, or you’ll need to rent a car.
There’s a parking lot right by the sand and the buses stop right by the beach, across from the Arribas Sintra Hotel (see below).
You can also hike from Praia da Adraga, following a trail through a pine forest for about 40 minutes. 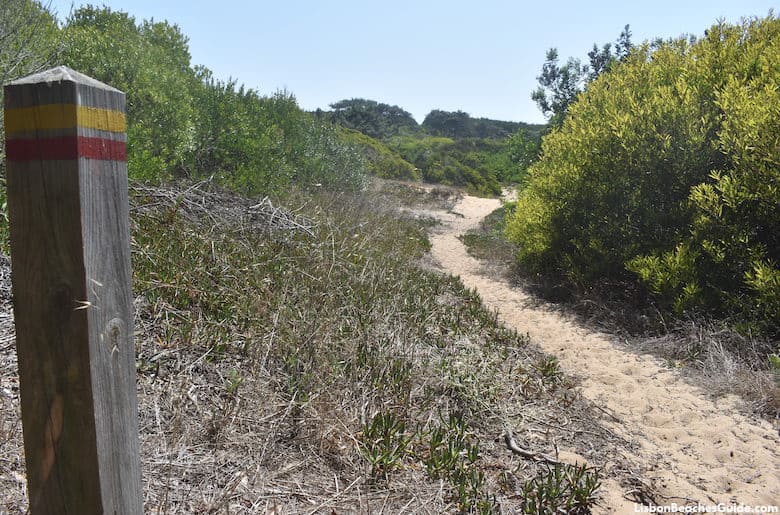 Follow the signs on poles and tree trunks, and you can walk through a pine forest to/from Praia da Adraga from/to Praia Grande.


Just south of Praia Grande is Praia da Adraga, one of the most beautiful beaches in Portugal that was also once ranked among the top 20 in Europe. To the north is Praia das Maçãs, the most popular beach on the Sintra coast, and further north is the picturesque Azenhas do Mar, a cliffhanging village. 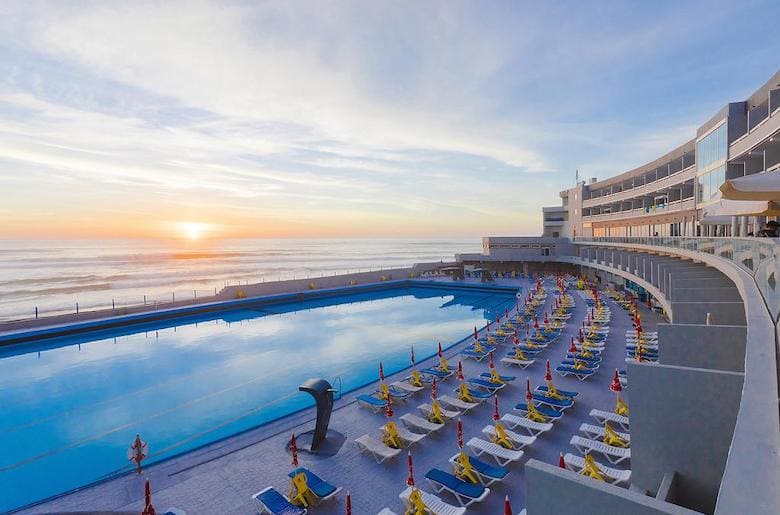 The large 100m-long seawater pool in this hotel, with magnificent views over the beach, is almost worth the trip to Praia Grande. It’s a modern 3-star hotel, with 59 rooms with balconies offering sea views. It’s very popular in the summer, so book early.