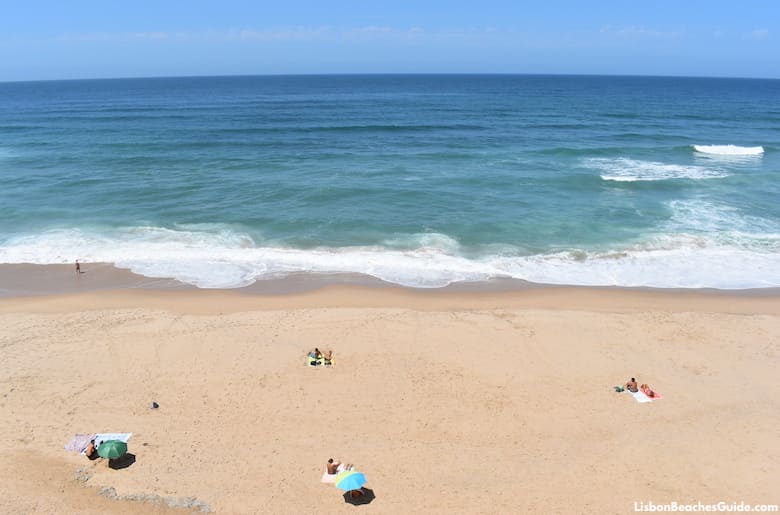 Praia da Aguda is a wild, often deserted beach. The image above shows it on a "crowded" day in August.

This is a wild beach, not supervised by lifeguards. It’s reached via a long staircase with about 230 steps down a cliff, and is mostly frequented by fishermen, naturists and dog owners (although animals are generally not allowed in Portugal’s beaches). 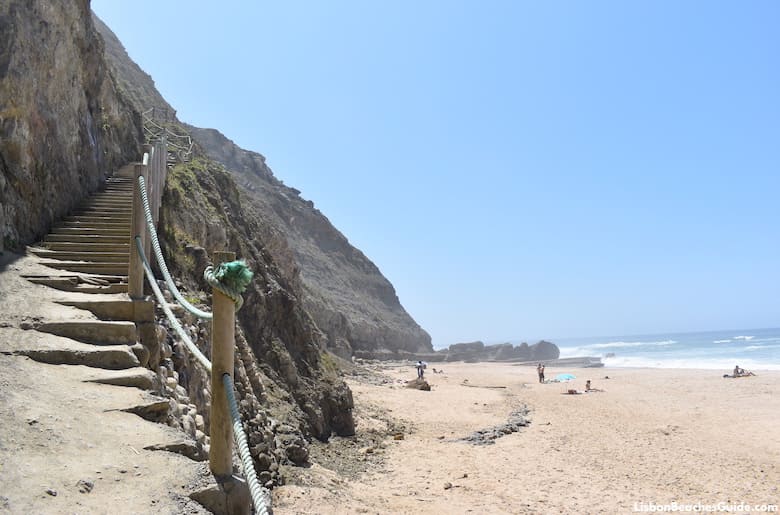 The beach is mainly reached via a staircase, but this access should be avoided, due to the instability of the cliffs.

Its landscape is made up of nearly-vertical cliffs and tidal pools created by algae-covered rocks. The relative seclusion invites naturists, and the Portuguese Naturist Federation lists it as an unofficial nude beach, although you’ll generally find few sunbathers in their birthday suit.

In 2021, local authorities placed a sign by the staircase indicating that access to this beach has been restricted due to the instability of the cliffs, which may lead to rockfall and landslides. The use of the staircase, which is in a state of disrepair in some parts, is considered high risk, but many people ignore the signs. It’s unlikely that the stairs will be repaired, in order to discourage its use. 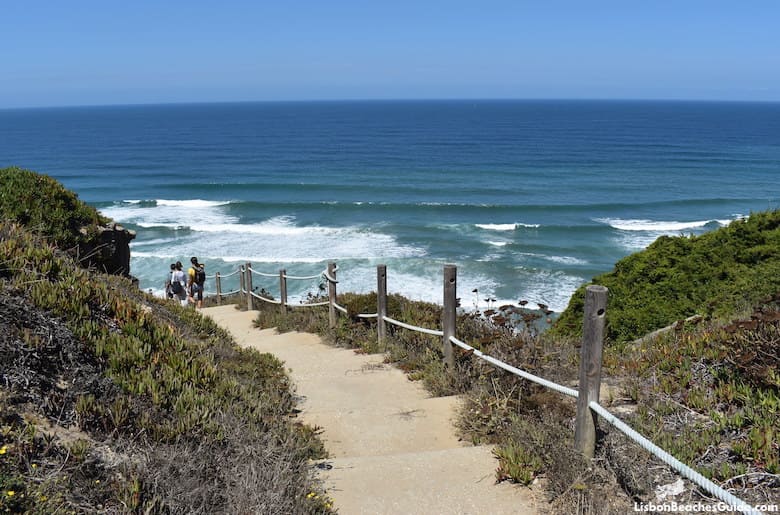 The top of the staircase to Praia da Aguda

To avoid the staircase, many access the beach from the neighboring beach of Magoito, by walking over the rocks. If you insist on ignoring the warnings, make sure you keep a safe distance from the cliffs, although it should be noted that this is often impossible, as the beach is very narrow, especially at high tide. 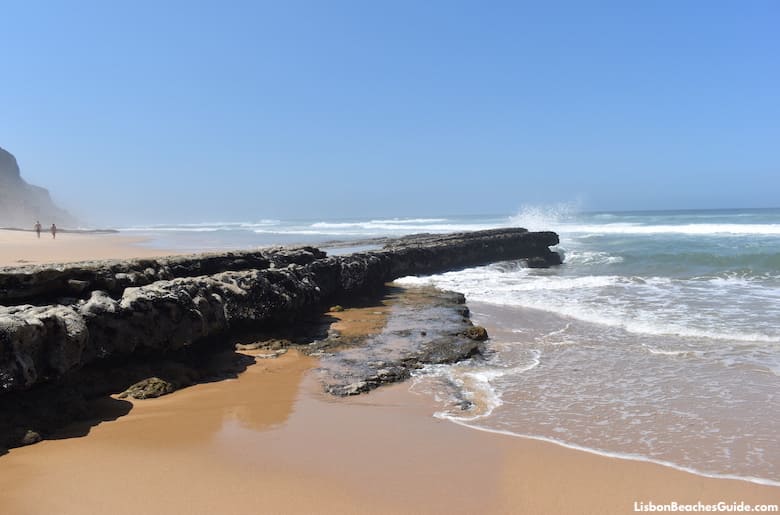 Beach for: Naturism
Lifeguards: No
Bathrooms: No
Showers: No
Rentals: No
Bar or Restaurant: No
Accessible: No
Parking: Yes
Transportation: Bus from Sintra

How to Get to Praia da Aguda 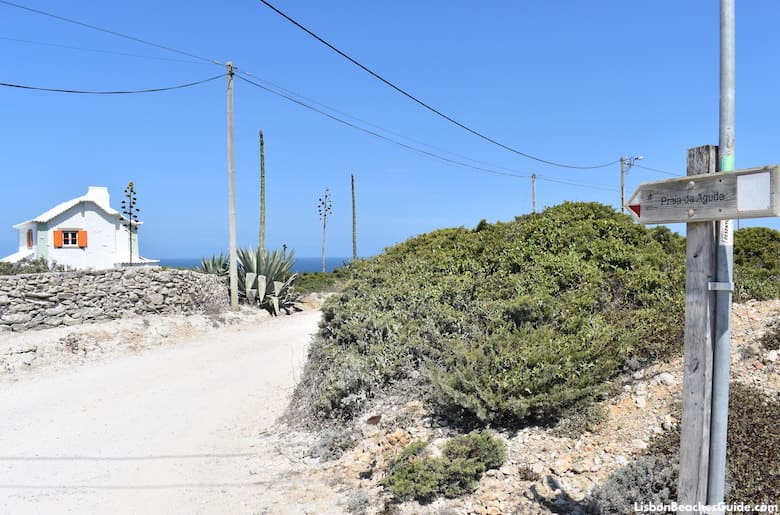 There's a sign pointing to the beach, by the road from Azenhas do Mar.

Take bus 441 from the Portela de Sintra terminal and get off at Azenhas do Mar. From there, walk up to Aguda (you’ll see a sign pointing to it on the coastal road), and about 15 minutes later you’ll find the steps down to the beach. As mentioned above, this staircase should be avoided, so the recommended access is walking over the rocks from Praia do Magoito.
If you’re driving, you’ll find a parking lot right above Praia da Aguda, by the staircase. 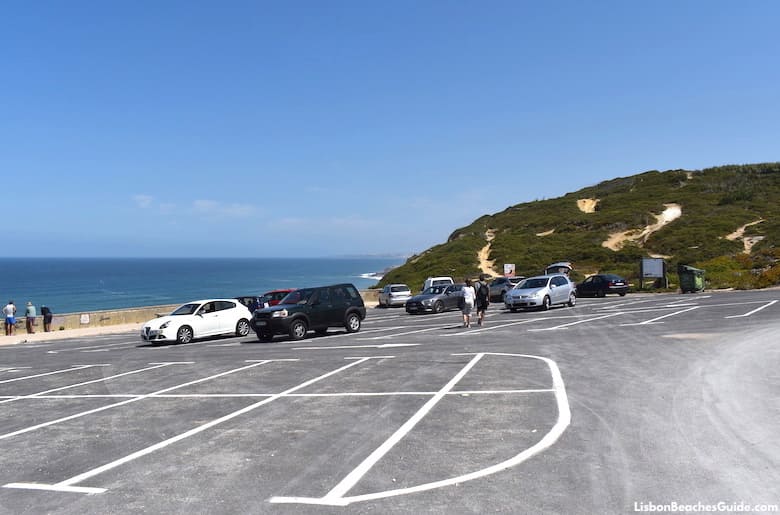 
In addition to the picturesque village of Azenhas do Mar, you may visit Praia do Magoito, the beach found to the north, across the rocks from Aguda (about a 15-minute walk away at low tide).

This all-white house stands on the cliff above Praia da Aguda and was built for a rich family in the 1940s by Raul Lino, Portugal’s leading architect at the time. Now owned by a German, it’s divided into seven apartments opening to a garden and ocean views. All guests have access to the swimming pool and tennis and basketball courts.