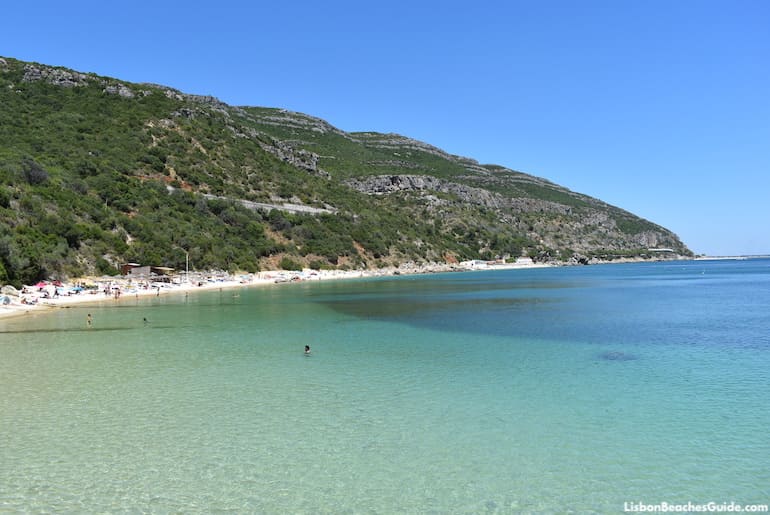 This coastline to the south of Lisbon, by the city of Setúbal, has breathtaking beaches. They’re part of the natural paradise that is Arrábida, a protected park, and were once a well-kept secret. Their calm, crystal-clear waters, with the beauty of the park as a backdrop, are now a favorite destination of the people of the Lisbon region, so traffic and parking spaces have been restricted to limit the crowds (see transportation information below). 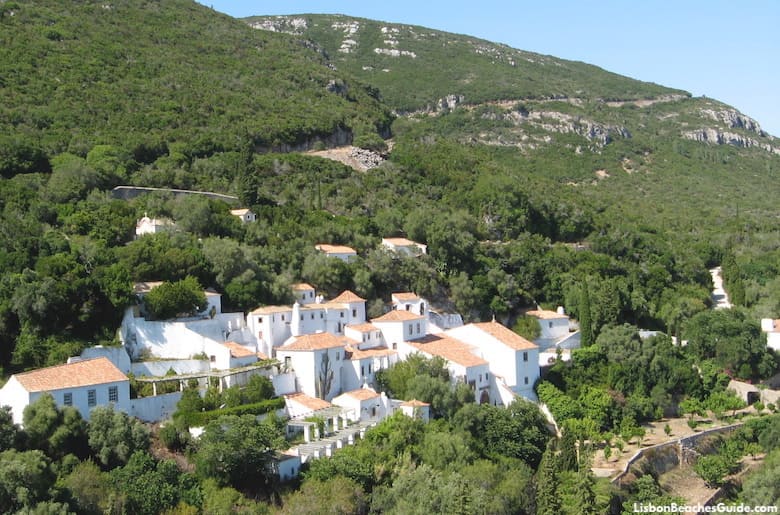 From 1542 to 1834, the park was home to Franciscan monks, who lived in seclusion in a white convent built amidst the steep hills. By the shore, there’s a magnificently green scenery, and a little port known as Portinho da Arrábida, which has a couple of laid-back restaurants serving fresh fish and seafood. Continue walking east from there to Praia do Creiro, a sandy beach with turquoise waters. From there you can walk up the road to three other beautiful beaches (Praia dos Coelhos, Praia dos Galapinhos and Praia dos Galapos). 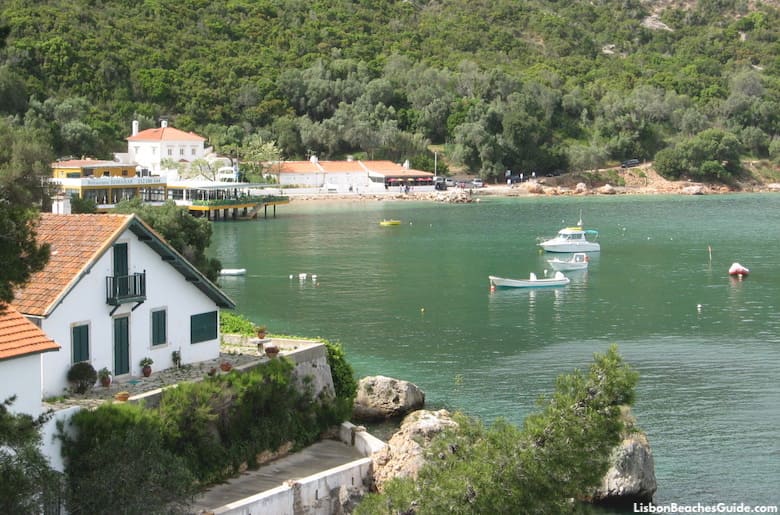 The tiny port (Portinho da Arrábida) in the park

If you enjoy nature and hiking, venture into the park before or after a few hours at the beach. It’s a curious landscape of diverse Mediterranean flora on the Atlantic, which originated under water around 180 million years ago, giving it a vegetation distribution that is unique in the world. It’s also known as one of the best places for geologists to learn about three key phases of the evolution of planet Earth and its tectonic plates. For this reason, some believe it’s a candidate for the World Heritage Site list. It extends for 35km (22 miles), reaches a height of 501 meters (1644 feet), and is something of a natural amphitheater above the sea -- there are stunning views from the snaking road that runs through it.
Between the parking lot and the sand of Praia do Creiro are Roman ruins dating back to the 1st century AD. They were unearthed in 1987 and show tanks of a fish salting complex.
Whether you’re staying in Lisbon, Sesimbra or Setúbal, a trip to Arrábida is one you’ll want to take in the summer.


Beaches in the Arrábida Natural Park


-Praia do Creiro - Located next to a picturesque port and overlooked by Roman ruins, this is the most famous beach in Arrábida and the choice of Lisbonites, who are able to park their car in the large parking lot.

-Praia dos Coelhos - This wild beach is an idyllic bay that was once a secret because it’s not easy to find. You must follow an unmarked path through the vegetation for about 10 minutes to reach the sand.

-Praia dos Galapos - A staircase leads down to this beautiful beach with calm and clear waters. In the summer, it’s mostly taken over by wicker parasols and loungers.

-Praia dos Galapinhos - It was once considered Europe’s most beautiful beach, thanks to its crystal-clear water and verdant landscape. It can be reached by following a trail through vegetation or by going over the rocks from Praia dos Galapos.

-Praia da Figueirinha - Because it’s the easiest to reach by public transportation from Setúbal, it’s usually the most crowded, but has calm, shallow waters, perfect for swimming and to take the kids.

-Praia de Albarquel - It’s the closest beach to the city of Setúbal, on the edge of the park, with a good view of the vegetation and of the Troia peninsula. It’s mostly frequented by the people of Setúbal.


How to Get to the Beaches in Arrábida


The beaches on the Arrábida coast can't be reached by direct public transportation from Lisbon. You need to take the train or bus to Setúbal and then one or two buses, depending on the beach that you want to visit -- buses from Setúbal only go to Praia da Figueirinha, so for the other beaches mentioned above you need to take another bus from there. More details below:

BUS TO SETÚBAL: If you choose to go by bus, there are two services, both operated by the TST company -- number 561 departing every 60 or 90 minutes from Sete Rios, and number 562 departing more frequently (every 30 or 60 minutes, depending on the time of day) from Oriente Station. The 561 crosses 25 de Abril Bridge and takes about 1 hour, while the 562 crosses the Vasco da Gama Bridge and takes about 45 minutes.

BUS FROM SETÚBAL TO PRAIA DA FIGUEIRINHA: The seasonal bus service that goes from Setúbal to Praia da Figueirinha operates between mid-June and mid-September. It’s number 723 of the TST company and departs from Setúbal’s bus station every 15 minutes (when you take the bus from Lisbon, this bus station is the final stop). It makes a few stops in the city, so it reaches Praia da Figueirinha in 25 minutes.
If you’re arriving in Setúbal by train, you need to walk for about 10 minutes to the bus station. It’s located on Avenida 5 de Outubro, 44. To get there, turn left out of the train station, go down Estrada dos Cipestres (which becomes Avenida Manuel Maria Portela after a roundabout), and continue until the end of the avenue, which is on Praça do Quebedo, where you turn right to Avenida 5 de Outubro.

BUSES FROM PRAIA DA FIGUEIRINHA TO THE OTHER BEACHES: In Praia da Figueirinha, you may take bus 722 to continue up the coast. This is another seasonal service of the TST company (operating between mid-June and mid-September), that departs from a factory’s parking lot (“Secil”) every 15 minutes (from 8:30am to 7:45pm), stops in Praia da Figueirinha, then at Praia dos Galapos and Praia dos Galapinhos (you should get off here for Praia dos Coelhos), before terminating in Praia do Creiro.

DRIVING FROM LISBON TO ARRÁBIDA: Many find it more convenient to rent a car. The Arrábida coast is less than one hour from the center of Lisbon, heading in the direction of Setúbal, after crossing 25 de Abril Bridge. Cars aren’t allowed by the beaches between the months of June and September, to avoid traffic congestion and to limit the number of people in this protected area. So you have to park in one of two parking lots -- one is found just before you reach the beach of Figueirinha, by the Secil factory, and the other is above Praia do Creiro. The TST bus 722 (mentioned above) links the parking lot by the Secil factory to the beaches. 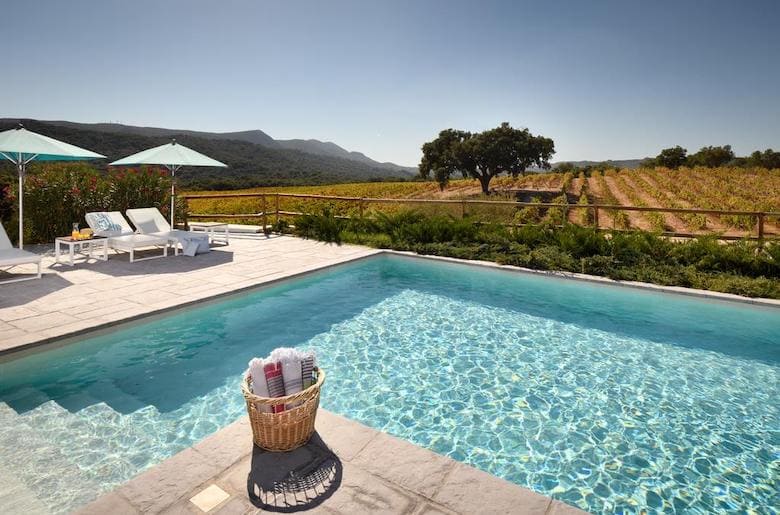 Arrábida is a protected area, so no hotels can be built by the beaches, but there’s this one up on the hills. You need a car to reach it, but if you want to spend more than one day at the beaches of the region, and prefer to stay surrounded by nature (instead of in the neighboring city of Setúbal), this is your only option. And it’s quite a good one, offering an exceptional service. There’s an outdoor swimming pool, a restaurant, and different types of rooms and suites, some of them with balconies.