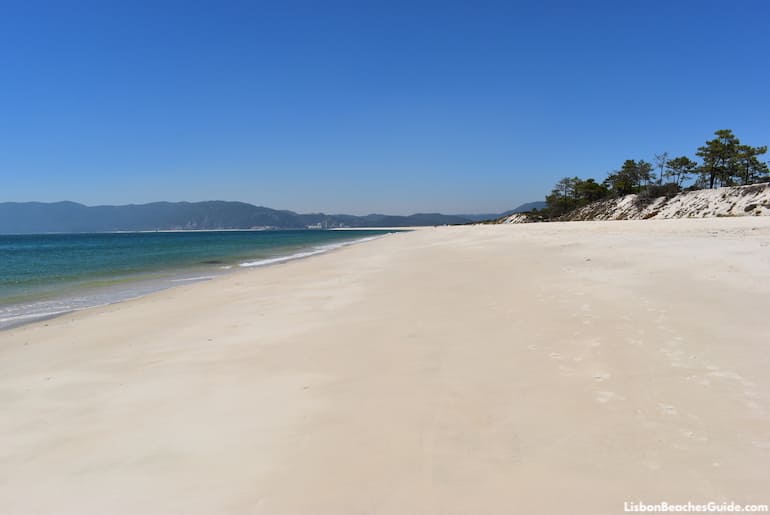 Troia is a popular summer destination, but is never crowded (this photo was taken in July!).

Although officially outside the Lisbon coast (it’s in the Alentejo region), Troia belongs to the city of Setúbal, which is the southern end of the Lisbon region, and is close enough to the capital to make it an easy day trip for fun in the sun and the sea. 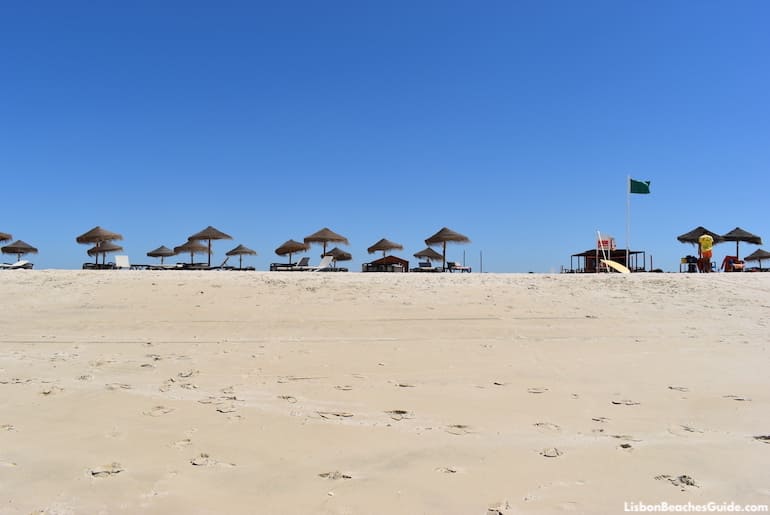 Wicker parasols and loungers are available in the summer.

The Troia peninsula is the starting point of Portugal’s longest beach (one of the world’s longest uninterrupted stretches of sand) that extends for 65 kilometers (40 miles) to the town of Sines. Remarkably, it has been able to keep its pristine beauty and there are only a few hotels and apartment buildings. It also preserves ruins of an important Roman settlement and a community of dolphins, which can often be seen in these waters. 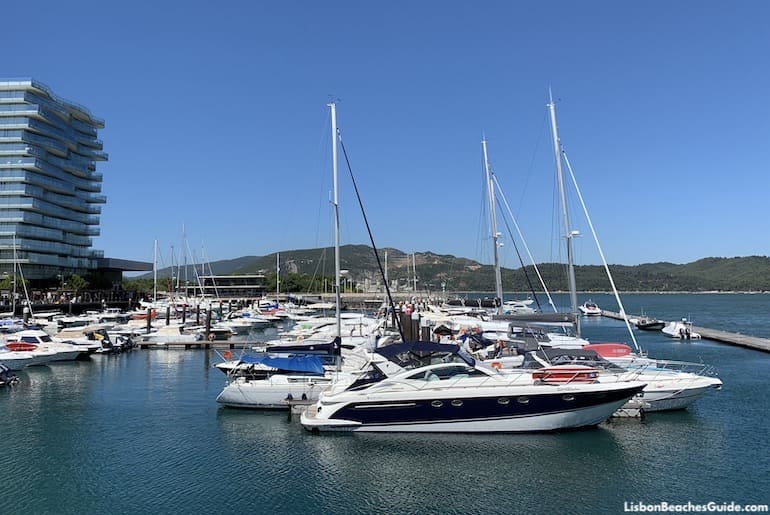 The Troia marina, overlooked by the landmark design hotel.

In recent years, it has been turned into an upmarket destination, but is less exclusive than Comporta immediately to the south, which is a quiet destination of the rich and famous (designer Christian Louboutin owns a villa here and Madonna often rode horses on this coast when she moved to Lisbon). It has a landmark design hotel (see accommodation information below) and a casino by a marina, but there’s little else to do besides enjoying the beach and the views. And they are some quite beautiful views, with the Arrábida Natural Park to the north and pine trees to the east and south.


Although it’s really one long beach, Troia is divided into four main “beaches” -- going from north to south, they are: 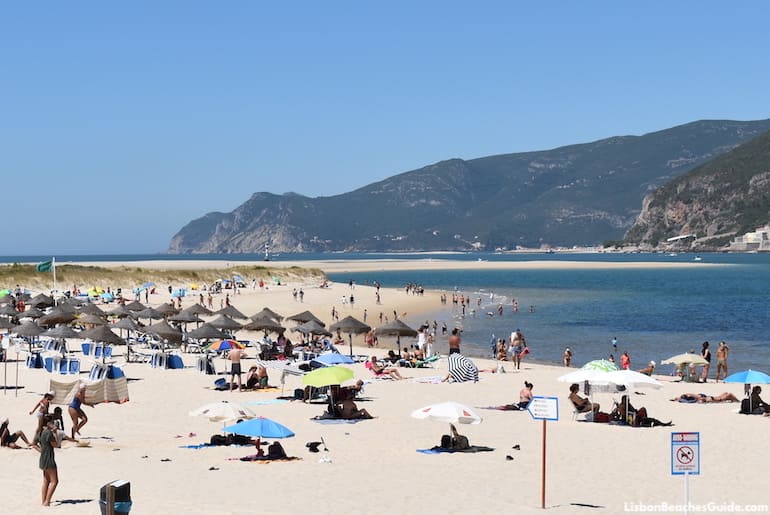 It’s the northern section, facing Arrábida’s vegetation, within walking distance of the marina and where you arrive in the catamaran from Setúbal (see transportation details below). It has wicker parasols and loungers for rent in the summer. The shallow, calm waters mean that this is where everyone brings the kids. 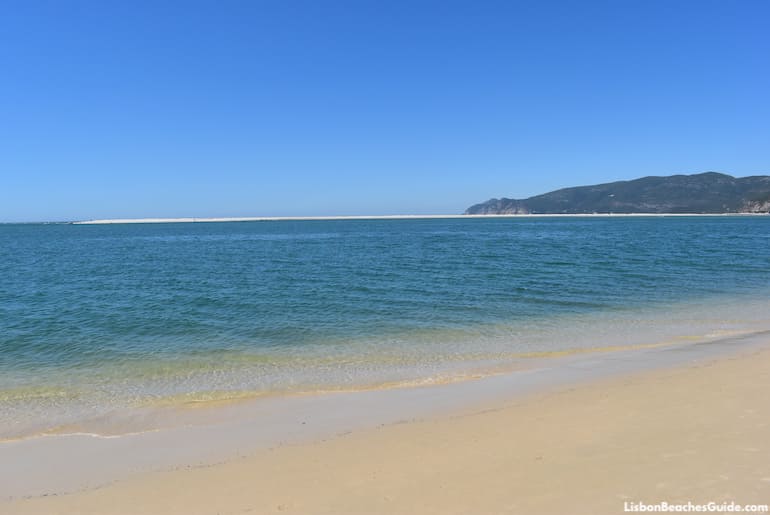 The boardwalk from Troia-Mar leads to this beach, which also has wicker parasols and loungers for rent. It faces west, and directly in front you see a sandbar known as “Ilha de Troia” (or “Troia Island”), which can only be reached by private boats, available for rent at the port of Setúbal. 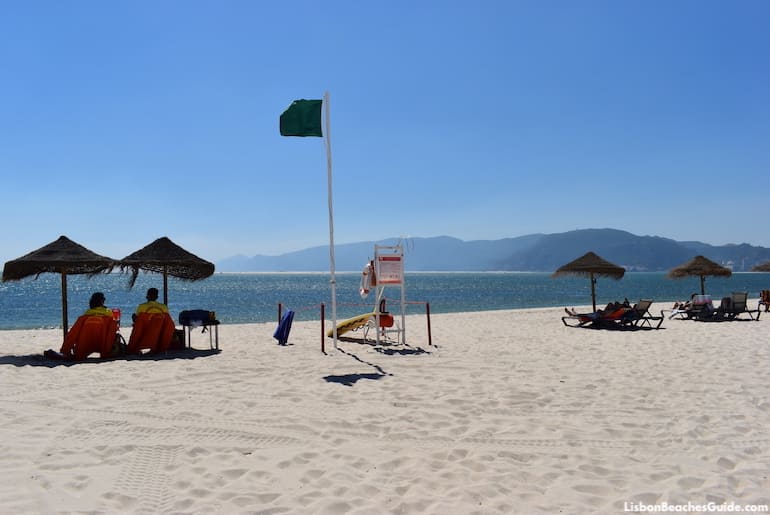 As it’s more distant from the hotels and apartments by the marina, this is a quieter section, but also has lifeguard supervision in the summer and a bar for refreshments. 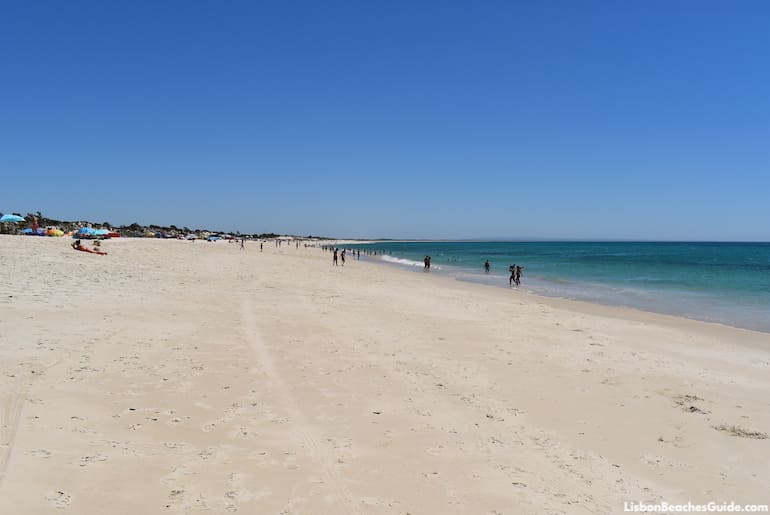 This is the southern part of Troia, where you arrive if you go by car, which means that it’s the most crowded section and more frequented by families. It has more of a beach resort feel and also lifeguards during the bathing season. 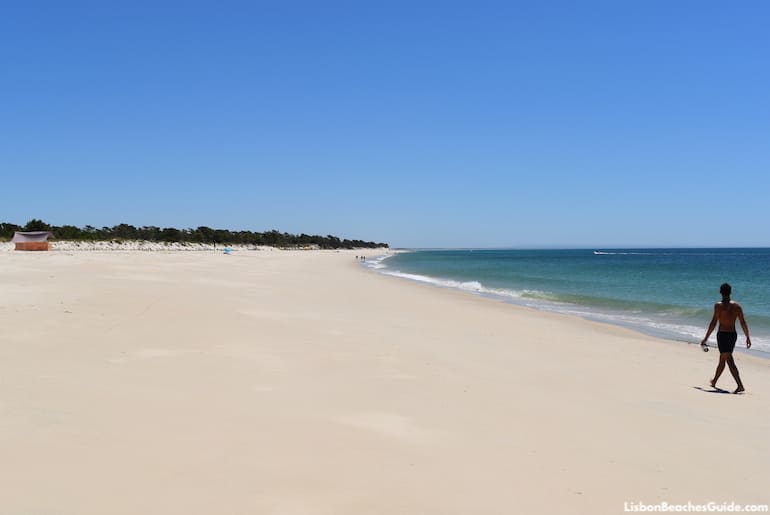 There are nearly deserted sections between the main beaches.

In between these beaches are nearly-deserted parts, with some people often choosing to discreetly sunbathe nude on the dunes (especially on the stretch between Troia-Galé and Soltroia, where you first see the pine trees, although this is not recognized as an official nude beach).

How to Get to Troia 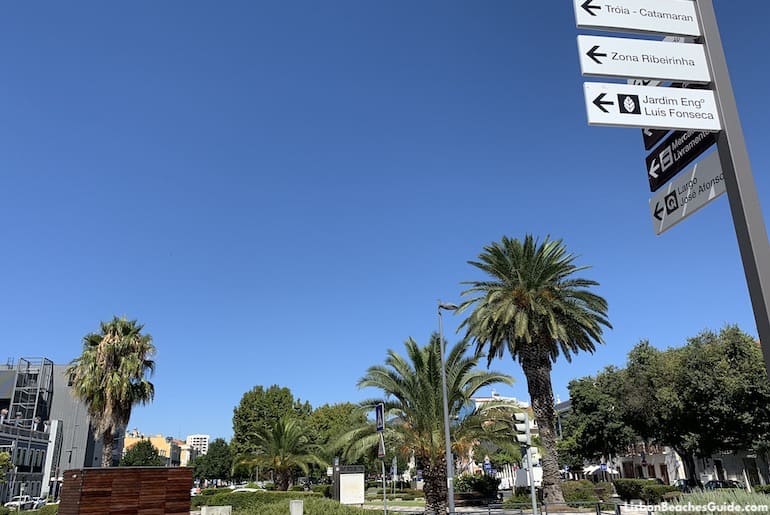 Signs in Setúbal's main boulevard (Avenida Luisa Todi), pointing to the port and the catamaran to Troia.

To go from Lisbon to Troia by public transportation, take the train to Setúbal, where you can then hop on a catamaran or ferry to the beach. The train departs from Lisbon’s Roma-Areeiro station (which is linked to the green line of the Metro) and stops at three other stations in Lisbon before crossing the bridge to the suburbs across the river, and terminating in Setúbal. Those other stations in Lisbon are Entrecampos (on the yellow line of the Metro), Sete Rios (on the blue line; connected to the “Jardim Zoológico” station) and Campolide (not connected to the Metro). The stations of Entrecampos and Sete Rios are the easiest to connect to from the center of Lisbon. 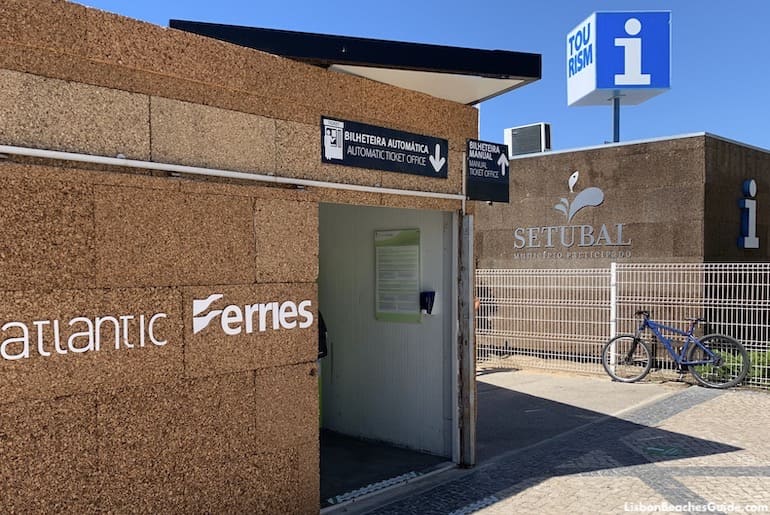 The ticket office for the catamaran to Troia

The train is operated by the Fertagus company, and departs once per hour. It takes 58 minutes to reach Setúbal, where you should exit the station to the left and go down Estrada dos Ciprestes, a road which becomes Avenida Manuel Maria Portela after a roundabout. At the end of that avenue, turn left towards Avenida Luísa Todi (Setúbal’s main boulevard) and the port (it’s about a 15-minute walk from the train station to the port). 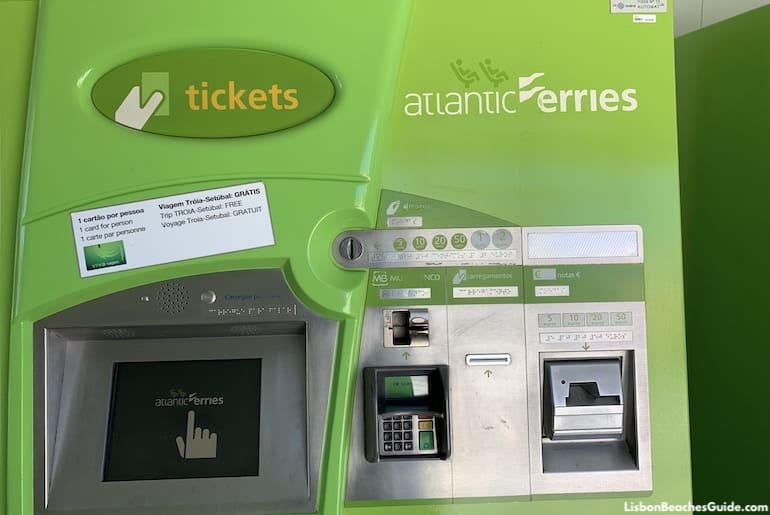 The machine to buy the catamaran tickets

At the port, you’ll see signs pointing to “Catamarans” or “Atlantic Ferries” -- that’s the ticket office and departure point of the catamaran to Troia. In the summer, it operates for almost 24 hours, departing once per hour on weekdays and every half hour on weekends, from as early as 6:20am to 4am! It takes less than 15 minutes to reach Troia, and has a pleasant outdoor area, where you can sit and admire the view of Setúbal and the neighboring Arrábida Natural Park. Outside the summer season, it departs once every hour. You can check the current schedule on the Atlantic Ferries website. 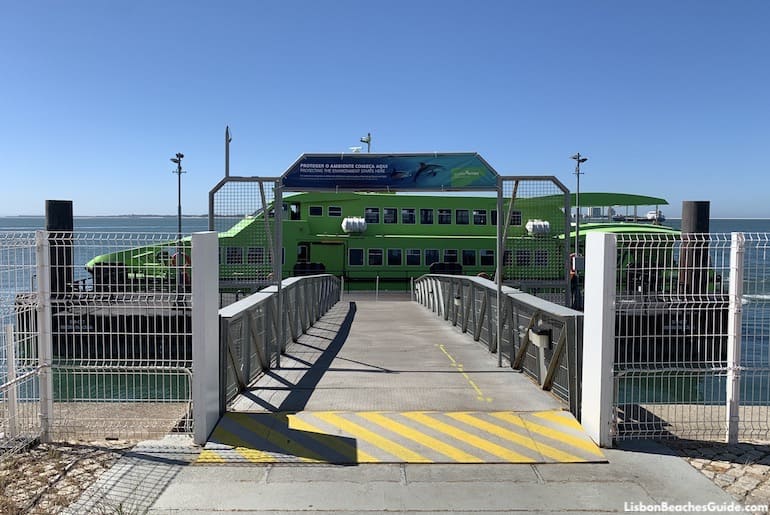 The catamaran at the pier in Setúbal

Tickets are €8.40 per person, but the return to Setúbal is free. You may buy your ticket at the ticket office or from the ticket machines. 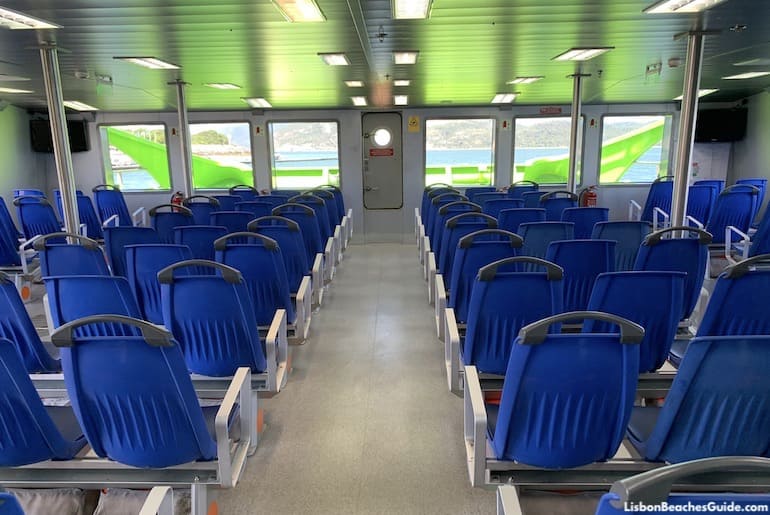 The interior of the catamaran to Troia

If you prefer to go by car, cross 25 de Abril Bridge to Almada and follow the signs to Setúbal. From the center of Lisbon to the port of Setúbal it’s about 45 minutes. You may then leave your car in Setúbal and take the catamaran to Troia, or choose the ferry, which takes cars. The ferry departs every half hour throughout the week, from 7:30am to around 11pm on weekdays and midnight on weekends (the journey takes less than 20 minutes). You’re charged €18.70 to take your car on the ferry, and that includes the fare for the driver. Another passenger in the car pays €5.30, and additional passengers pay €4.10 (children up to the age of 5 are free). If you leave your car in Setúbal but take the ferry as a regular passenger, tickets are €5.30 each way. This means that the catamaran is the cheapest option. Also note that the catamaran takes you to the northern side of the Troia peninsula (to Troia-Mar beach), while the ferry goes to the southern end, Soltroia. 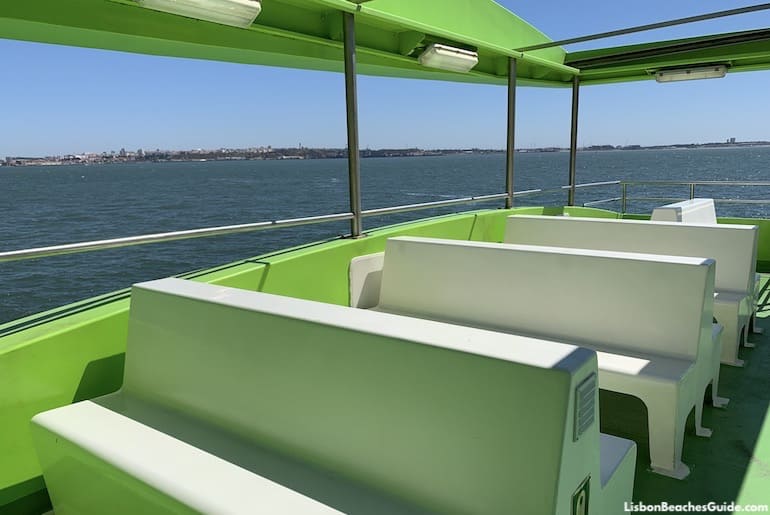 The outdoor area of the catamaran offers views of Setúbal and Troia along the way. 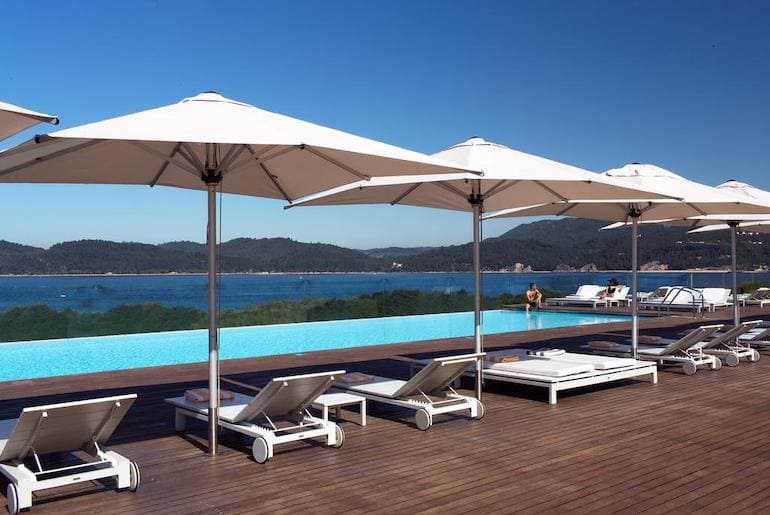 This hotel is a Troia landmark. Its undulating façade faces the marina, and its interior (divided into 61 rooms and 144 suites) is filled with over 200 pieces of art by contemporary artists. It’s a design hotel and also houses a casino and a huge spa. It’s really meant for adults, but there’s a pool for children in addition to the regular outdoor infinity pool. Many of the rooms have sea views and some feature hot tubs on the balcony. The beach is a 3-minute walk away. 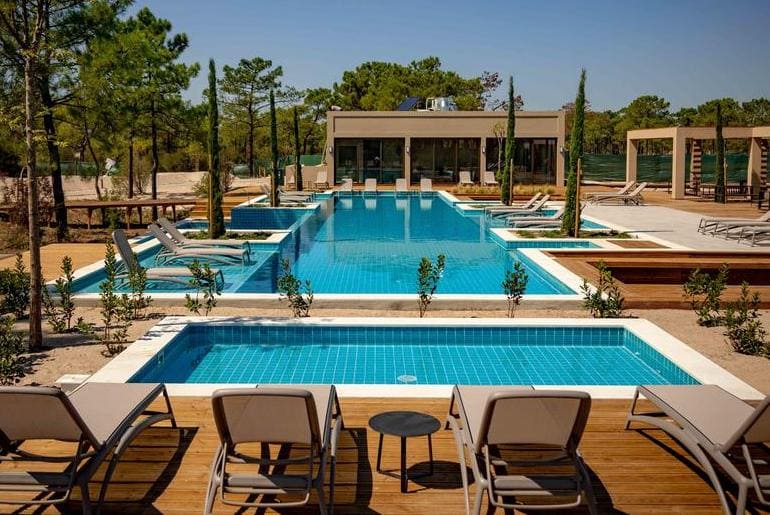 Surrounded by nature, this resort is a 5-minute walk from the beach. Each unit has 2 to 4 bedrooms and a terrace with sun loungers, plus access to swimming pools. 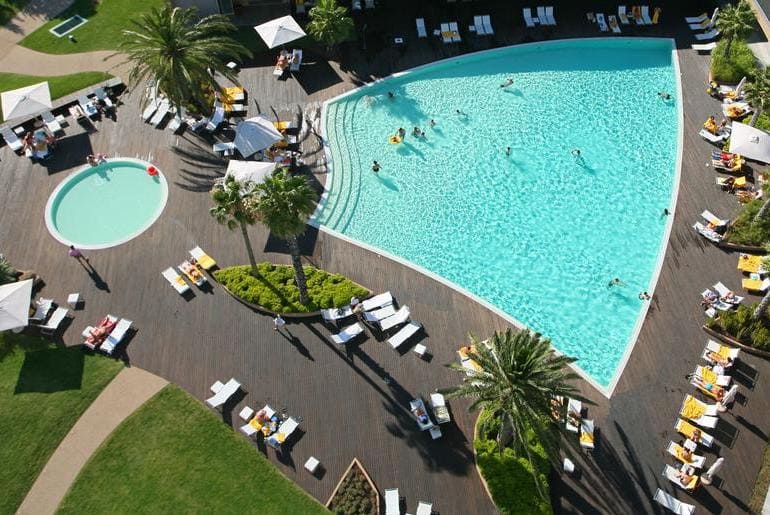 One of the high-rises in Troia is this hotel with modern and comfortable studios and suites for families with children. Due to its calm waters, Troia has always been a family-friendly destination, and this is the top choice for those traveling with kids. Fully-equipped kitchenettes allow guests to prepare their meals but there’s also a restaurant serving local cuisine. A large playground keeps kids entertained, while adults can unwind at the spa. There’s an indoor pool and two outside (one of them for children). 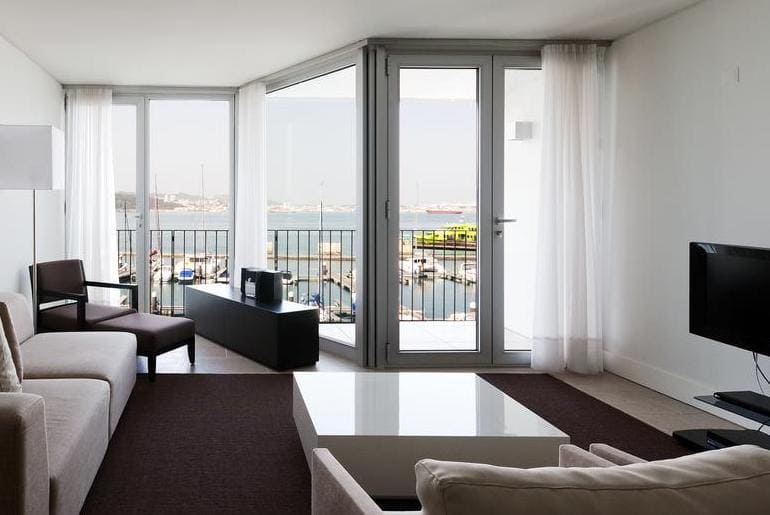 Conveniently located by the marina (steps from the catamaran pier and the beach), this property is for those who prefer to stay in apartments. These have one or two bedrooms, and are fully equipped. Most are quite spacious and have a balcony. 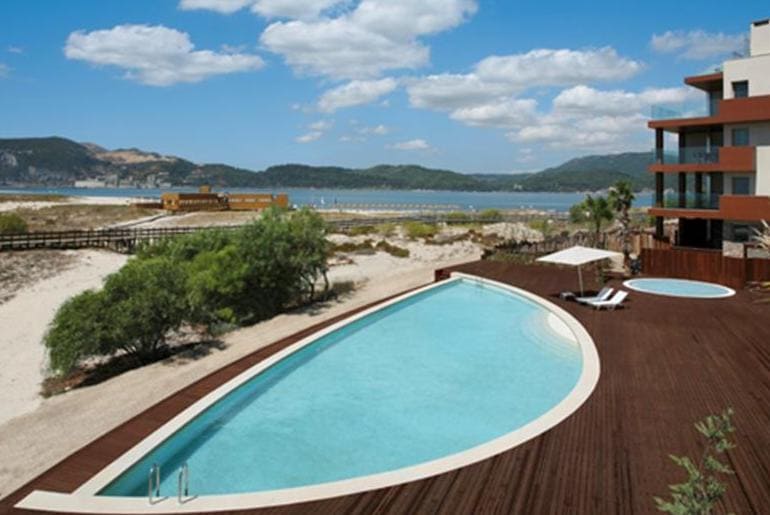 This condo hotel is right by the beach and has an outdoor swimming pool. Some of the fully-equipped apartments face the ocean, while others have views of the marina and the Sado River.