Praia da Ursa has a stunning landscape of sea stacks

It’s one of Portugal’s most beautiful beaches, but it’s often nearly deserted. It’s right by Cabo da Roca, which means that it's the westernmost beach in mainland Europe.

The water is rarely calm at this beach, so swimming isn't recommended.

Because it takes some effort to reach (you’ll have to follow a path that goes down a cliff), it’s wild and unspoiled, so those who dare to come here usually take advantage of the isolation and sunbathe nude. It’s therefore an unofficial naturist beach, but you may keep your bathing suit on and simply enjoy the natural beauty around you. 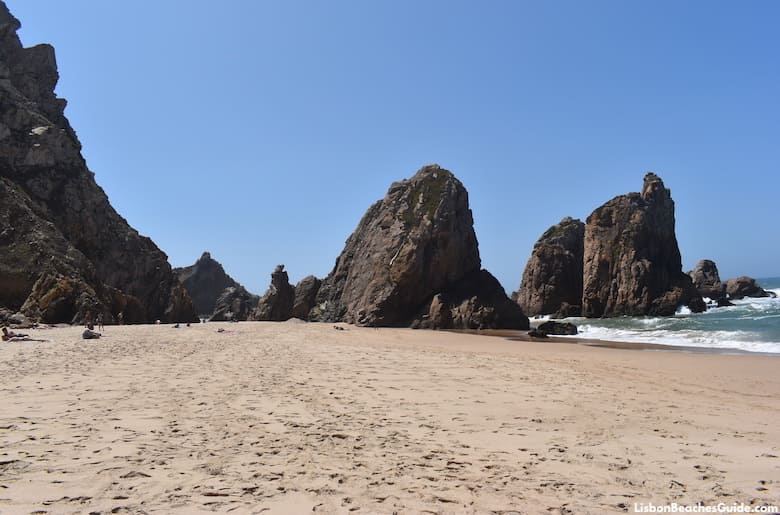 Praia da Ursa is known as a nude beach

The water is cold and the waves quite strong, so it’s a beach for photos and sunbathing, but not for swimming. There are no lifeguards.
Its name (“Bear Beach”) comes from the so-called “rocha da ursa” (“bear rock”), one of two colossal sea stacks which some say has a shape resembling a bear holding its cub, when seen from the north side. Legend has it that many thousands of years ago, during the ice age, a female bear lived here with her cubs. When the thaw began, the gods ordered all the animals to leave the site, but the bear disobeyed. As punishment, the gods turned her into stone and her children into small rocks around her. 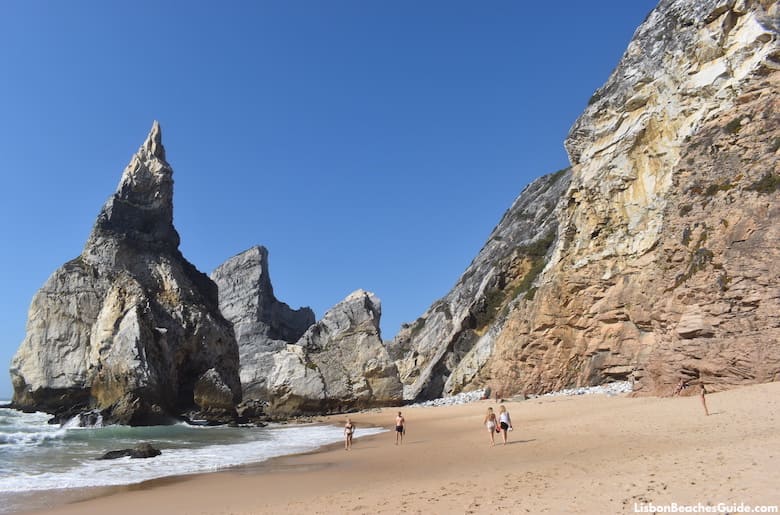 Praia da Ursa is not easy to reach, but the beautiful scenery is the reward.

As there are no facilities of any kind, remember to bring water and food if you plan to spend the day here. Also don’t forget your parasol if you want some shade -- don’t stay anywhere near the cliffs, as rocks may fall.
This is not a beach for families with children or for older people who may not be fit enough for the hiking adventure. But everyone else will find that the effort to reach it is more than worth it, as the stunning landscape is quite a memorable reward -- just be sure to wear appropriate shoes for the hike.

Beach for: Naturism, Couples, Instagram
Lifeguards: No
Bathrooms: No
Showers: No
Rentals: No
Bar or Restaurant: No
Accessible: No
Parking: Nearby
Transportation: Bus from Cascais or Sintra
What to Take: Sneakers instead of flip-flops, light backpack, water, food, bags to take all the trash with you, towel, umbrella if you prefer shade, sunscreen, fully-charged phone or camera for photos.

How to Get to Praia da Ursa 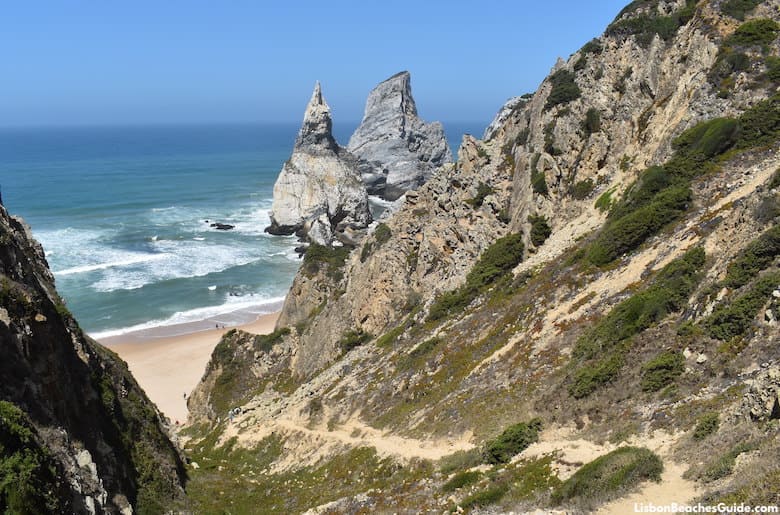 The end of the trail that leads to the beach

If you don’t have a car, it takes some time and effort to reach Praia da Ursa. From Lisbon, take the Cascais train from Cais do Sodré station, which departs every 20 minutes. Once in Cascais (40 minutes later), cross the road from behind the station to the CascaisVilla shopping mall. Below it, you’ll see the town’s bus terminal. Hop on bus 403 of the Scotturb company, which departs every 30 minutes. Its final destination is Sintra, but it stops in Cabo da Roca (in less than 25 minutes). The stop is right by the lighthouse, and from there to the trail that leads to the clifftop above Praia da Ursa it’s about a 10-to-15-minute walk (you may also ask the driver to stop on the stop just before Cabo da Roca, for the beach).

If you’re in Sintra, take bus 403 that goes to Cascais, departing every half hour from the train station. It stops in Cabo da Roca in about 35 minutes.

If you go by car, you may park in Cabo da Roca or on the gravel road where the trail down to the beach begins. 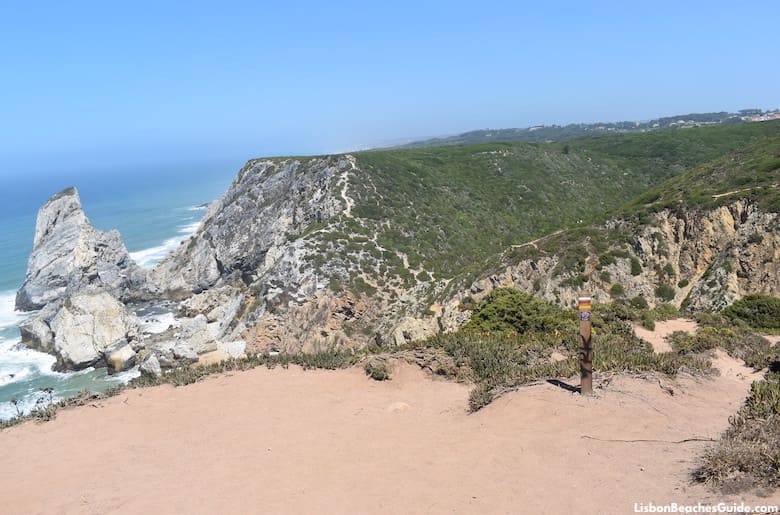 View from the top of the cliff, about halfway through the first trail to Praia da Ursa.

There are two trails down to Praia da Ursa from the road to Cabo da Roca. The one closest to the cape (named “Trail #1” below) is more scenic, while the one that starts further up the road (“Trail #2”) is more direct (the first one zigzags down the cliff). Both take the same amount of time (about 20 minutes) and have the same level of difficulty. Both are easy to find but have irregular surfaces that require good footwear -- take baby steps. About two thirds of the way down, the two trails merge. 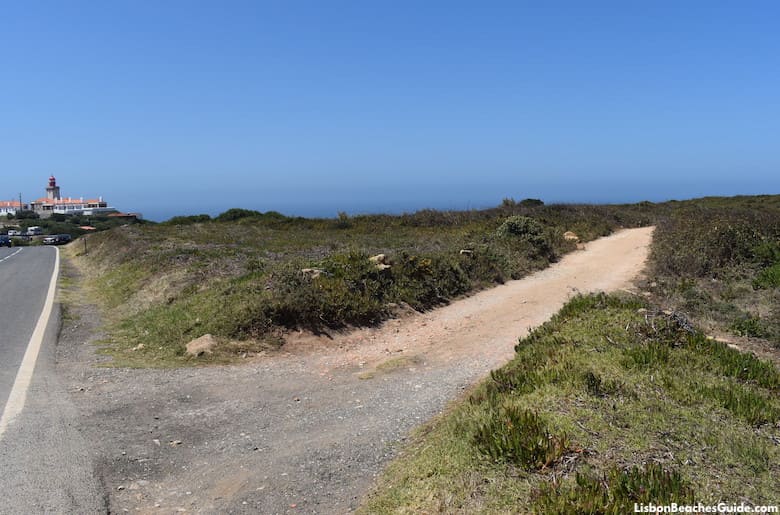 Trail #1 - With your back to the lighthouse of Cabo da Roca, you’ll see a gravel road to your left as you walk up the main road from the cape (pictured above). Some people park their car on this gravel road and continue on foot when the car can’t go any further. You just need to follow this road and eventually you’ll see the beach and the narrower path that leads down to it from the top of the cliff. 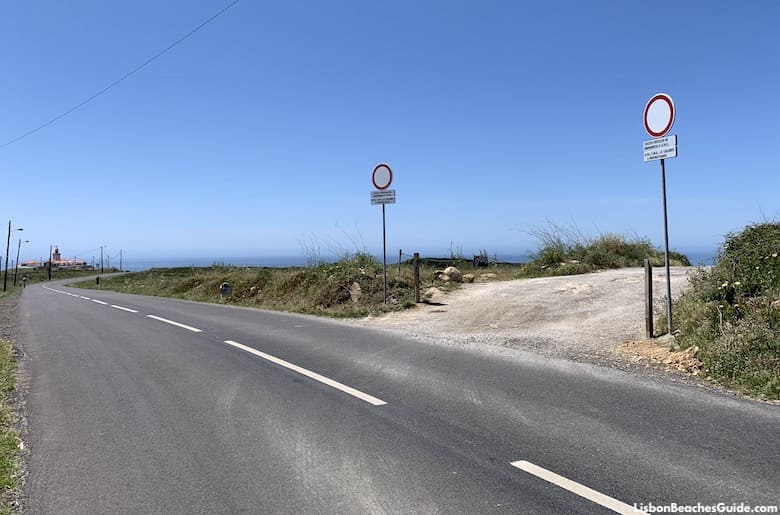 The beginning of the second trail to Praia da Ursa, from the road to Cabo da Roca.

Trail #2 - The second trail to Praia da Ursa is accessed through another gravel road, parallel to the first one, just up the main road. Some people also leave their car here. 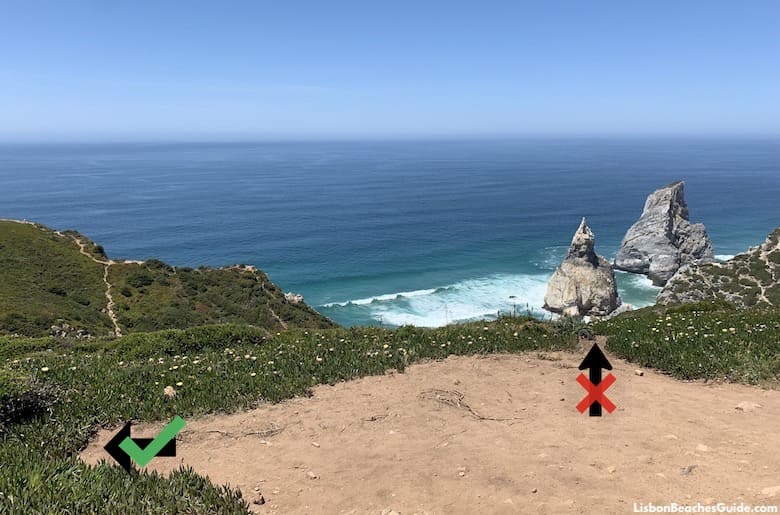 Take the path to the left, not straight ahead at the top of the cliff.

When you reach the top of the cliff, you’ll see two paths (pictured above) -- take the one on the left, since for the one right in front (which would be more obvious) you practically need to be a mountain climber. 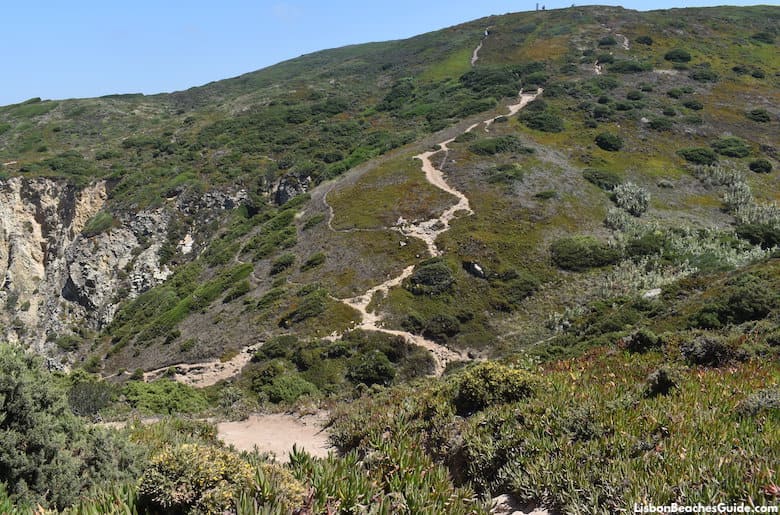 The second trail that goes down the cliff to Praia da Ursa. 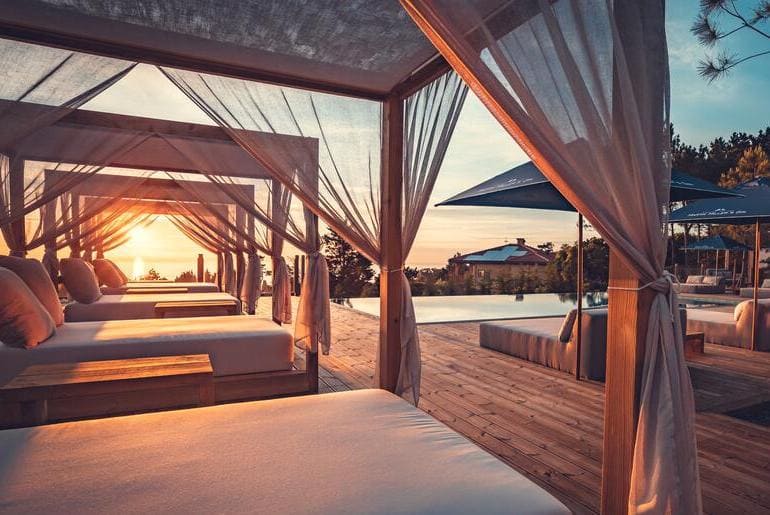 The closest hotel to Praia da Ursa (it's a 5-minute drive or a 30-minute walk) is quite breathtaking. It's perfect for couples, offering beautiful sea and sunset views. It features a terrace with a swimming pool and a bar, while inside are double rooms and a 1-bedroom apartment in contemporary-retro style. There's also the option of a mobile home.

Other Beaches by Praia da Ursa 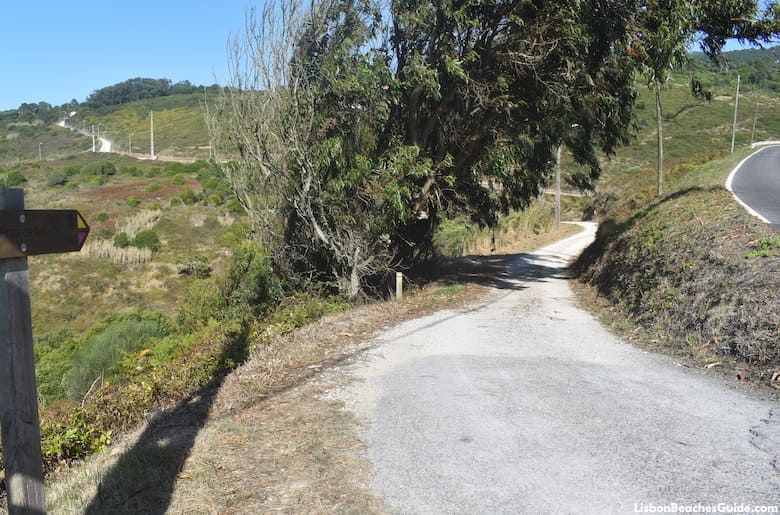 The closest beach to Praia da Ursa is Praia da Adraga, which is also among the most beautiful in the Lisbon region. It’s the first beach to the north and can be reached in about 15 minutes by car. It’s also possible to hike there, taking about 45 minutes, following a well-marked trail (pictured above).
Also in about 15 minutes by car is Sintra’s largest beach, appropriately named Praia Grande. Another 5 minutes to the north (20 minutes from Praia da Ursa) is Praia das Maçãs, known as one of the most family-friendly beaches in the region.


Going for a day at the beach in Praia da Ursa is always combined with a visit to the cape that marks Europe’s westernmost point (Cabo da Roca). It’s a very beautiful and popular tourist attraction, and a place where you’ll want to take selfies at. After that, you may head east to the fairytale palaces of Sintra or south to the sandy beaches of Cascais.