Europe's westernmost beaches are located by the continent’s sunniest capital. Lisbon’s abundant sunshine, mild temperatures and long stretches of sand make it one of Europe's most blessed cities and a unique tourist destination, combining urban pleasures with fun by the sea. Facing the Atlantic, it’s the European capital closest to sandy beaches, with a varied and beautiful coastline. Most of it flies the Blue Flag, indicating cleanliness and water quality, and it’s also one of Europe's major surfing destinations. You can head west to Cascais, north to Sintra, or south to the Caparica, Arrábida and Sesimbra coasts, and there is always a spot for you.
When in Lisbon, a trip to the beach always enhances your city break or holiday experience.


Lisbon doesn’t have one coastline, or two, or even three, it has four very different coastlines! There’s the coast along the Cascais train line, which faces south and passes by the suburbs of Oeiras and Estoril; the coast of the Sintra mountain range which faces west, the Caparica coast to the south, and the coast of the protected Arrábida Natural Park. 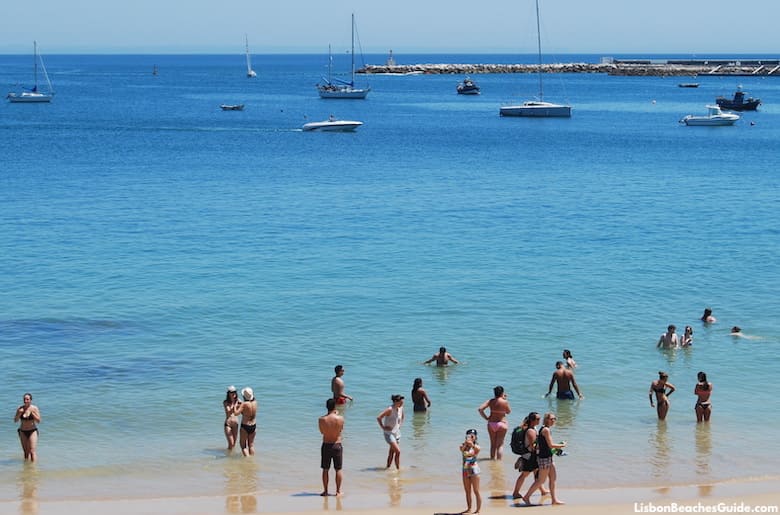 The Cascais coastline extends to the west of Lisbon and is the easiest to reach (by a regular train service). It’s therefore the most popular with tourists (especially families and couples), and has some beautiful sandy beaches with calm waters, good facilities, and excellent hotels by the sea. The Old Town, which is the last stop of the train, is quite an attractive and cosmopolitan destination for a day at the beach or a beach-based vacation. 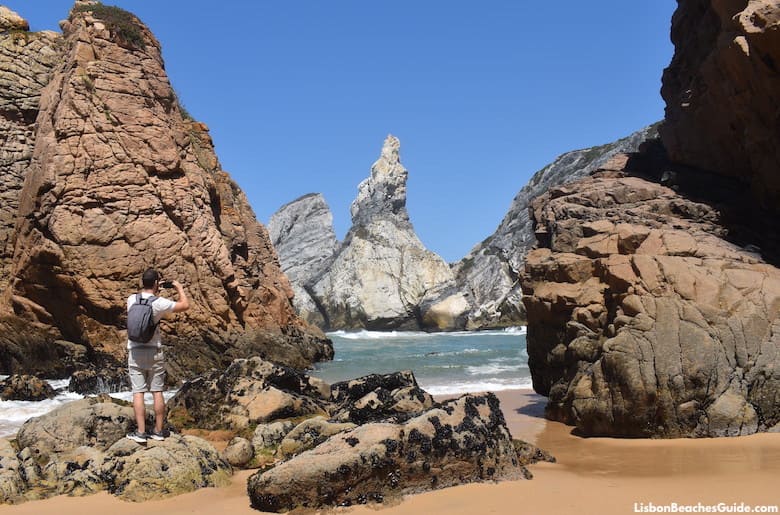 The coastline below the Sintra mountain range is found to the north of Cascais, and is a wilder coast. Public transportation to the beaches is rather infrequent, so it attracts few tourists. Those who plan carefully or who choose to rent a car, however, are rewarded with a dramatic natural landscape made up of white sand nestled between towering cliffs and rugged rock formations. It tends to be windy and therefore cooler, but the powerful waves attract surfers. Nearby is Cabo da Roca, a cape that’s the westernmost point of the European continent. 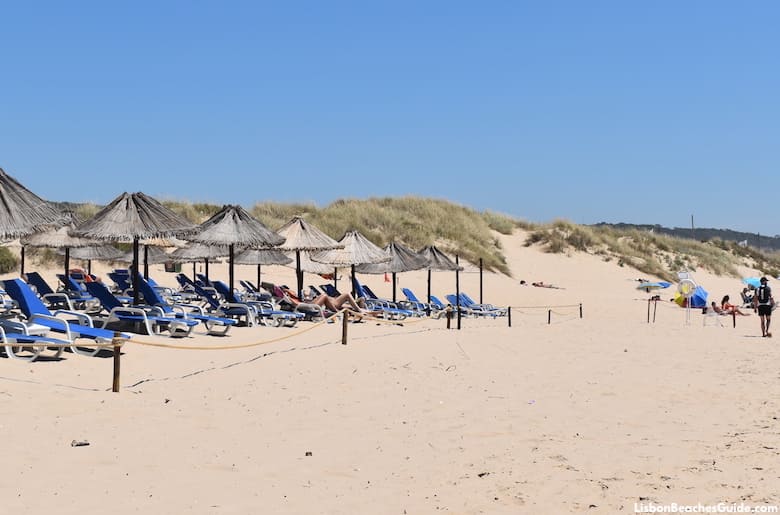 The Caparica coastline lies to the south of Lisbon, and is one continuous 15km- (nearly 10 mile-) stretch of golden sand. It’s really one long beach, but is divided into different sections, each with its own atmosphere and type of crowds. It’s also a trendy place to be on summer nights, thanks to the beach bars. Buses connect Lisbon to the town of Costa de Caparica, and during the bathing season there’s a small tourist train that runs down the coast from the town, stopping at several beaches. Despite the transportation links, it’s still better reached by car, and there are few places to stay, so it mostly attracts locals. 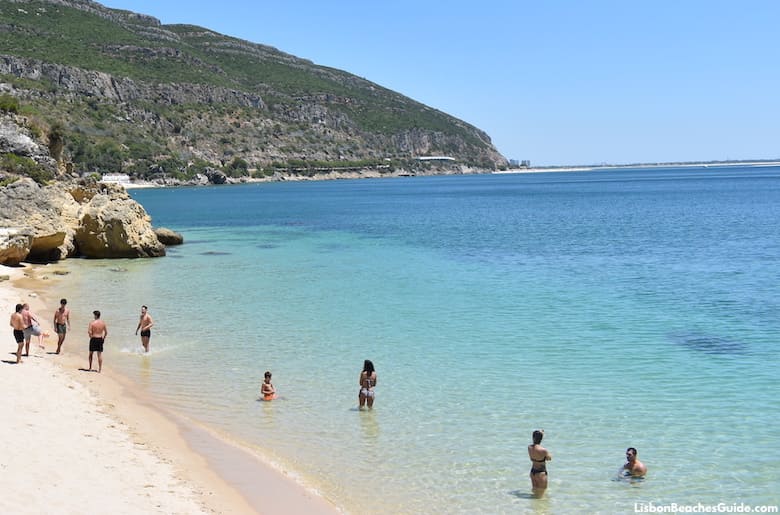 Still part of the Lisbon region, the romantic Arrábida coastline (further south by the city of Setúbal) has some of the most beautiful beaches in Portugal. Surrounded by the lush hills of the Arrábida Natural Park, it has calm, crystal-clear waters and soft golden sand. It’s a protected area best reached by car, but the public transportation connections have improved. However you get there, you'll enjoy pristine beaches of great natural beauty and secluded spots. 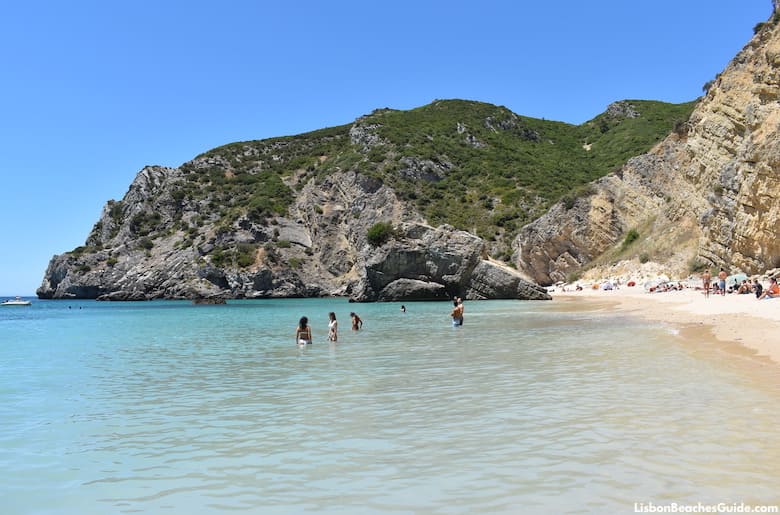 The Arrábida Natural Park extends to Sesimbra, which also has some of Portugal's finest beaches, and immediately to the south is the Troia peninsula, which, although no longer part of the Lisbon region, is easy enough to reach on a day trip. 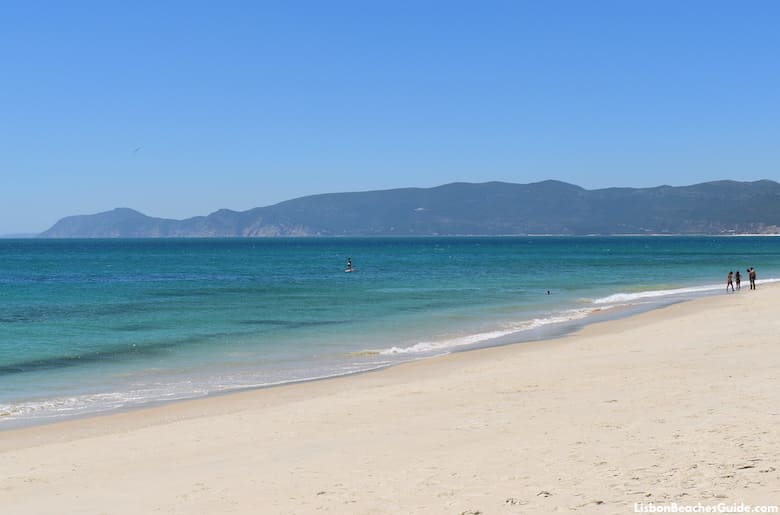 Choosing the Right Beach for You in Lisbon


Which beach you choose depends on how far you’re willing to travel, your transportation options, your travel companions, and what kind of experiences you want to have:

The Fortresses on the Lisbon Coast 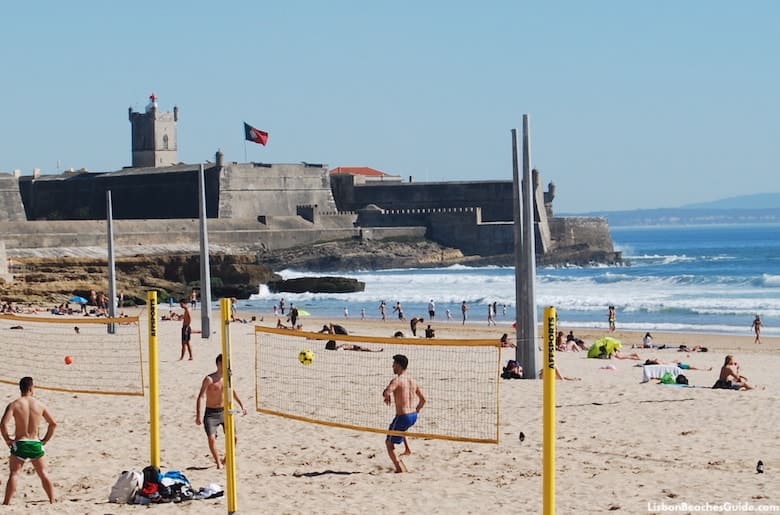 Once you pass Belém (the last Lisbon neighborhood before the seaside suburbs), you see a number of fortresses along the coast. They mostly date from the 1600s, and were built to protect Lisbon from “unwelcome visitors,” as the Portuguese capital received spices and gold from its colonies in Asia and Brazil. The oldest fortress dates back to 1553, and is found in Oeiras, but the others are from between 1647 and 1679. Some of these military constructions also served as residences, but are now mainly landmarks on some of Lisbon’s most popular beaches. Sadly, only a few have been restored and are in use (as official residences or as a hotel, as is the case of the Guincho fort). Most are closed and in a state of disrepair. The last cannon was fired in 1998, as a symbolic act to mark the end of the military function of these constructions.

Preparing for a Day at the Beach in Lisbon


Most beaches around Lisbon have good facilities (especially those in Cascais), but for the more remote ones you should remember to pack water and snacks -- and never forget your sunscreen and sunglasses. The beach clubs in Costa da Caparica and Cascais usually provide towels, but elsewhere you should take your own. Also make sure your camera or cell phone are fully charged, as you’ll surely want to take plenty of photos of the beautiful scenery!
It can get chilly after the sun sets (even in July and August), so if you’re staying for a sunset or an eventing cocktail, pack a change of clothes.


Remember that the surfing beaches have good waves for a reason -- strong currents -- so always surf where it is safe, closer to the shore, and follow the advice of instructors and lifeguards.
Also keep in mind that Lisbon is on the Atlantic, not the Mediterranean, so water temperatures are often just around 15 to 20 degrees celsius (60-68F), inviting long swims only on the hotter summer days.
Crime is not an issue on the Lisbon coast, but on the more crowded beaches (like Tamariz and Carcavelos) it’s a good idea to watch out for pickpockets and never leave your belongings unattended.